Why You Should Take Lots of Pictures

Why You Should Take Lots of Pictures

There’s a thought that floats around the photography community that less is better when it comes to taking pictures, that is, you should only take the shot when it feels right or your sure that everything is just right, then and only then should you push the button.  The problem with that as I see it is there is never a time when “everything” is just right. Combinations are endless in nature and to wait until that exact moment when everything is perfect or close to it runs the very real possibility of missing everything leading up to and past that moment.

What light is just right?

This goes well beyond the obvious in photography of “the light” being just right (that’s another issue as well, maybe for a later post.) Yes photography is nothing more that capturing light and the better quality the better chances of a favorable outcome. But one mustn’t ignore all the other factors. Composition, exposure, sharpness of capture.

Exposure is one of those things I believe people overlook the importance of most of the time. The simple act of changing the exposure of a shot can produce much different results of the same scene. The school of thought here is to “nail” the exposure and move on, but that might not always produce the most favorable results. It can be good to let parts fall into the shadows or even allow parts of the image to overexpose. The message here is don’t try to see how few captures you can take, see how many you can take. If your back isn’t up against the wall on time what do you have to lose and if fact you more than likely will learn something, experimentation is the playing ground for all improvements.

One and done equals many missed opportunities

I talked with a prominent nature photographer of over 30 years and they told me and have repeatedly said it was not uncommon for them to make 100 captures of the same scene before moving on. Now this may take place over an hour’s time but they keep shooting knowing full well that conditions and their own view of a scene is constantly changing from minute to minute.

If your locked into a location and physically can’t move and have 1 minute before you have to go than one or two captures is probably all you going to get, but if this is not the case don’t sell yourself short or worse yet think you captured the scene as best possible in one or two shutter clicks. There is just no way you have covered a scene good enough to say one shot got it all, simply taking a few steps one direction or another will produce a different look.

Visualization is a 2 step process: (at minimum)

You shouldn’t be trying to visualize the final result in the field. Let me say that again. You should Not be trying to visualize the final result in the field. There has been and probably always will be much talk about visualization which began most notably with the great Ansel Adams, coining the phrase visualization (not pre-visualization that makes me crazy when people say that since there is no such thing as pre-visualization.) To make this clear, I am in no way saying don’t visualize when you’re in the field, by all means you must visualize or why would you take the shot to begin with. What I’m saying here is don’t visualize the “final” result (the result after post processing.) Doing this in the field when your mind should be in capture mode will only distract you from your goal at that moment which should be to capture images. Leave the final visualization to when you’re setting down at the computer looking over your many captures this is where you slide away from your capture mode and slide into your creative mode. There is lots of room for visualization in the creative mode so don’t limit yourself here, let the juices flow.

As I was walking back to my campsite I came upon a group of buffalo gourd plants, I had no idea they were around and simply stumbled upon them. I had no plans of taking pictures of such things at that time since I had been out with a wide angle lens capturing the vast prairie, flint hills and wildflowers. But hey opportunity struck to capture something a little different so I plunked the tripod down removed my lens cap and started taking pictures. Focusing in on the colorful yellow bloom of one I liked what I had captured and a couple of shots seemed good to me. I stood there for another 30 seconds or so and looked at the gourd and how the rising morning sun was starting to cause a bright area in the upper right hand corner of the frame, I verified this looking at the previews of the 2 shots I had taken. I knew I didn’t want much of this brightness in the image so more attention would be given to the bloom and cool blue colored leaves. I recomposed slightly to help eliminate some of the brightness and felt a little better about the next few shots. I then noticed there was a small stick that had been poking up between the bloom and the leave on the right side. I removed the stick checked composition and focus again and took some more shots. In all I took 11 shots of this one plant making 2 separate adjustments to what I had been doing. I studied it for another minute or so and then decided that what I had was exceptable and traveled on down my path.

Further visualization of this image was done in post. I cropped the image slightly to again remove more of the brightness of the upper right hand corner then let the creativity come into play. Contrast adjustments to help darken the surrounding foliage and brightening of the bloom, sharpening of the bloom itself and a slight soft focusing of the entire image was finally done. As for the other 10 captures I haven’t used, I have no regrets in taking them.

The point here is don’t settle for one or two shots, sometimes the spur of the moment comes and goes to fast to make helpful decisions on what you need to do. Keep shooting, keep looking, keep experimenting if you don’t get anything better than your first shot great, but you never know unless you take the time to try. 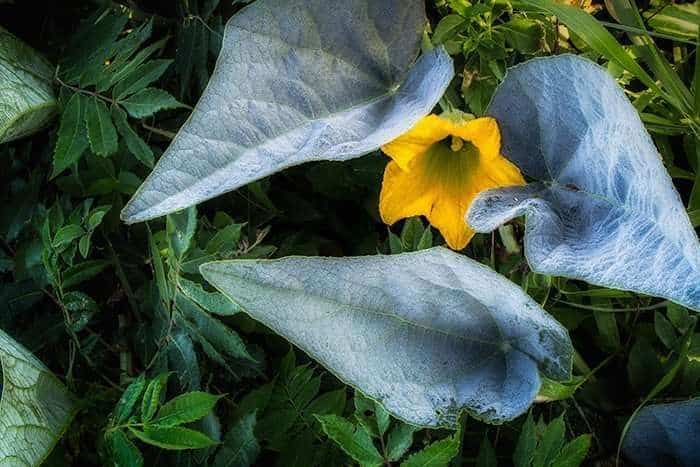