Well it’s been a month since I got a post up here and that last one was of the September wallpaper! Wow how time flies! I have told myself over and over again to be more frequent with posts but maybe what I should be telling myself is to just do it as opposed to just wanting to do it. Every week I come across experiences that I know I would like to share here but then I seem to move on and never get them done. Procrastination is a real killer when trying to grow, learn and share the world with others. Before I slip into a self confiding post I better just move on with the task of today.

September was a wonderful month in many ways with time spent on a new project I have been working on, that being “folios”. I am hoping in the next few weeks I can complete my initial works of four individual folios celebrating the four seasons in the Kansas Flint Hills. This will be a priority in the next few weeks one that I will excitedly share right here on the blog.

The Autumn season is here as well! Yippee! That will be a priority the next few weeks! Did I just make two things priority? Hmm. Guess I don’t have much time to sleep in the coming weeks there is just way to much to do. Oh how things can pile up quickly. For some reason I kind of like it that way, it gives me much to look forward to and to keep me busy with. Not that it always turns out the way I want but having goals is always a good thing, at least for me.

OK, now on with the show. The last week of September found my lovely bride (of seven years) and I in the heart of the low country, South Carolina to be exact. Up and down the coast from Myrtle Beach to Charleston. It was a wonderful week! The weather was great and the experiences will be remember for a lifetime.  This was our third trip to this area and we are becoming quite fond of them. Most of the week had not be planned out for anything big it was just a week of fun and relaxation. Of course my relaxations was spent with a camera in my hands most of the time as my other half kept sand between her toes.

This last week I have shared some of my pictures on my facebook page so if your so inclined you can see a few more images there. I did have a few ideas of pictures I wanted to take while on the coast and one of those ideas is the subject of this months wallpaper.

For a couple of evenings I stayed out along the water after most had since turned in or at least went back inside. I wanted to see the stars above the ocean. How could anyone Not want to see such a thing! I found one thing out quickly, it gets plenty dark at the edge of the ocean after sunset in an almost eerie kind of way. Not that it is at all frightening but more like, “I wonder what is out there in the dark of the night”? As if a giant squid could pop up out of the water at any moment and carry you away into the deep dark depths of the Atlantic! OK, maybe I’m letting the approaching Halloween stories get the best of me here but it is rather exhilarating to say the least.

I didn’t stay out much past an hour or so after sunset just long enough for the stars to begin to show. I thought still having the smallest amount of light would be good to help give the waves a bit of visual notice. I was along an area that for the most part had very little light coming from behind me but there was light coming from a distance on both sides, it made getting the proper exposure rather tricky. I will typically shoot at a very high iso such as 3200 or even 6400 to get a fast shutter speed and be able to capture pinpoints of star light. This was still the case but the exposure time had to be held to no more than 10 seconds to keep whites of the waves from blowing completely out and the encroaching side light to a minimum. I think I took around 30 exposures in all this particular evening.

A new experience for sure since I am most comfortable on the prairies at home with many possibilities when it comes to landscape pictures. What turned out be a deciding factor of these seascape photos to me were how the waves were captured. It really impossible to trip the shutter on a 10 second exposure as waves are coming in and know just how the wave will end up in the final composition. To me that was the funnest part. Standing in one spot and getting a different picture every time!

Prints of this image may be purchased by clicking here.

Or if you would like to help support these offerings you may use the Donate button in the sidebar to make a Donation of your choice, Thank You.

Enjoy this months (late as it is) offering; “Atlantic Stars” 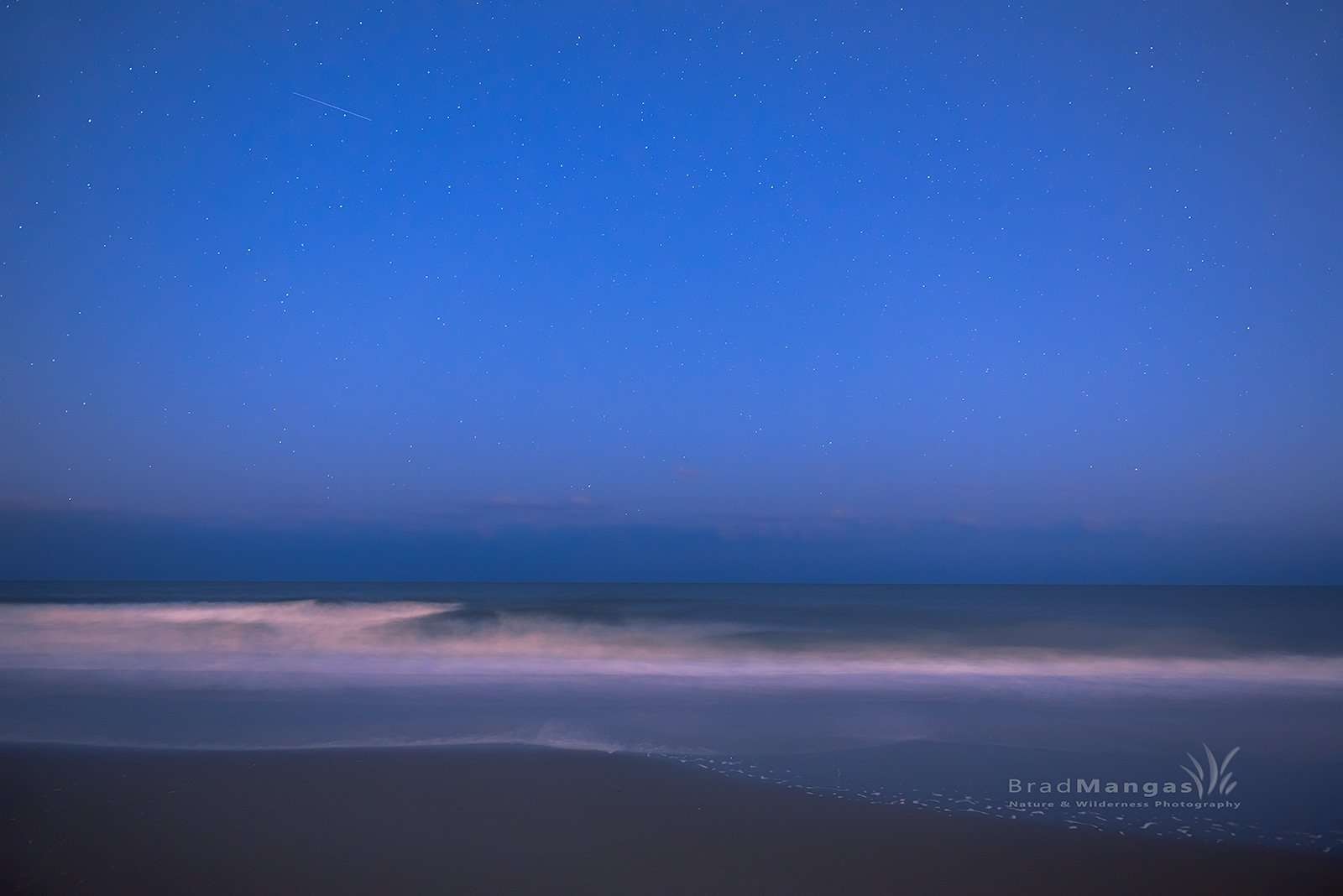