In search of springs, bounties are never-ending for photographers, finding the early colorful growth amongst the greening of the land is fun and challenging. I spent some time the last couple of weeks doing much of this myself. My time in the woodlands with wildflowers, time out on the prairie and flint hills in search of signs of spring including in these parts, burning of the previous year’s tallgrasses.

The weekend before Easter I returned to my hometown to visit my soon to be 82 years of age dad. A nice afternoon spent reminiscing about anything that came to mind. I brought up something that I have had friends talk about recently and that is the hunt for morel mushrooms. I’m not sure how many people in other parts of the country or world for that matter spend some of their springtime days in search of these tasty elusive little tidbits but in my opinion, it is well worth it.  That led me to help my dad into my truck and us going out to an area that he told me my granddad use to find them. A very enjoyable afternoon to say the least.

I’m glad I was able to spend time out in nature with my dad on a day that was filled with beautiful cloudy skies and nice cool springtime temps. After my visit was over and I headed back towards home some hour drive away and like I usually do take a few detours from the direct path. One that led me to a grand area of my home county that I began visiting last fall and was captivated by the big views and subtle rolling of the prairie land. I knew with the clouds that were producing wonderful light I would have to find a place that I could attempt to sum up my gratefulness of this beautiful day.

I always keep a watchful eye on the skies and particularly the cloud cover, a big factor on whether or not my camera comes out between sunrise and sunset. Sure I believe there is no such thing as bad light but I also believe there is such a thing as really good light, a somewhat serious photographer knows the difference soft light compared to harsh light has on the outcome of an image. On this day not only was the light great the clouds were even better. Complete cloud cover but with texture and definition that doesn’t happen all that often.

My drive soon took me to up to an area that I had photographed last fall when I was still working on my daily photograph project and made this image. The sign along the road with the big open view still grabs my attention. This time the image would have to be about not only the sign on the open prairie but also the sky and clouds that were playing a major part in my decision to be there in the first place. 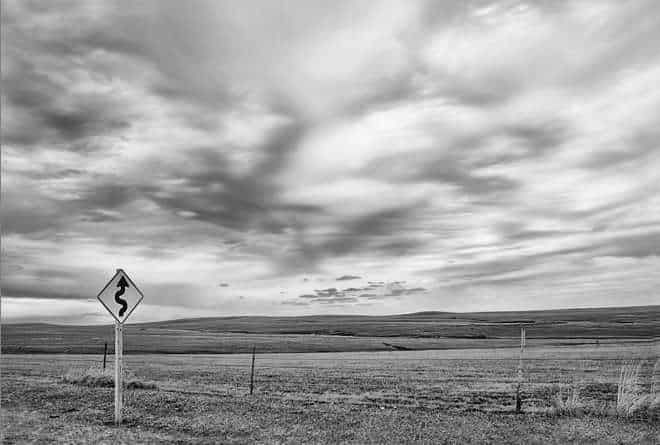 A few different compositions were made that included the sign, sky and distant rolling prairie. Once satisfied with what I had captured my camera searched for more of this wonderful view. Slightly to the right my wide angle lens a similar scene with the clouds again capturing my attention and a second image was made. I knew almost from the beginning of the day that any image taken would benefit from not only the cloud cover but if composed with the sky as the major part of the scene had great possibilities of processing to a black and white final result, ending up with these first two images. 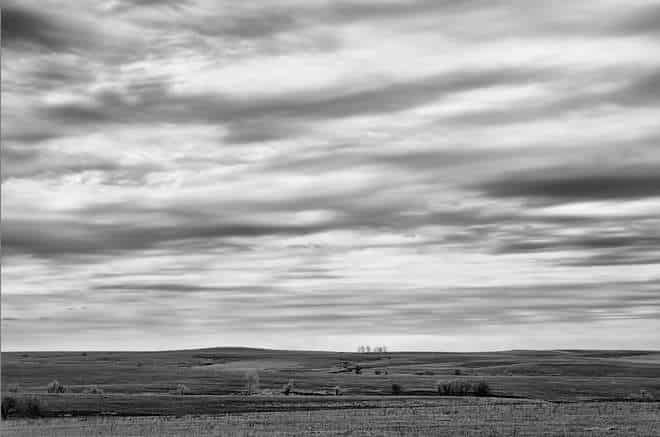 The cloudy conditions carried on until the next day when I made a decision to wait until the late in the day to attempt to capture a sunset shot in the flint hills. Driving to a predetermined area for 30 minutes or so before sunset I set up and waited. While waiting on the quiet land I took out my trusty iPhone and took this shot, and using instagram (which is a cool little free app) uploaded to facebook and twitter (yep I even had a signal in the middle of the flint hills). Well, my waiting turned out to be a very enjoyable time in peace and solitude of the flint hills but the sunset I was hoping for never materialized. Too much cloud cover I figure, but during this time I didn’t let the opportunity pass by without at least one more chance at taking advantage of the condition for another black and white image.

I always look forward to cloudy days, I know maybe I’m just strange, but so many more photo opportunities exist during the day than with bright clear skies. While most had been complaining about the cloudy spring days I was able to add these 3 images to my growing collection of monotone landscapes. Spring color in black & white, who thought it could be so fun.