I’m a little late in getting some info out that I have been wanting to share for awhile, and that is an image that was selected to be used as a wall mural in the Kansas Museum of History. In May of this year I was contacted by the Director of the Kansas Museum of History about a new display they were going to install in the main entry area of the gallery. They were looking for 7 images that depicted Kansas and Kansas history to be used as a wall mural. 6 of these images would be displayed in a postcard format over a main wall mural. The wall mural was to be 38 feet wide by 12 feet high and span a 3 angled wall! They inquired about an image of mine of the Flint Hills and wanted this to be the 38 feet by 12 wall mural. Well, needless to say I was quite pleased with the opportunity to be represented in the museum as well as having a photograph used at such an enormous size!

The image they chose is titled “Wild Blue Yonder” click that link to see it. This image was taken in May of 2009 in Geary County, Kansas. I was fortunate enough to be in the beautiful Flint Hills shortly after the spring burns had taken place and the new prairie grasses had began their regrowth. This along with some of the early wildflowers that spring up during this time, most notably in this shot, Wild Blue Indigo. I was also very fortunate to have the cooperation of a beautiful Kansas sky at this moment. All in all it has always been one of my favorite pictures and one of the most popular with viewers as well.

One of the issues that concerned me with the use of this image was first, it was taken with a 10mp dslr, the Canon XTi which I had at that time. Secondly it was going to be cropped heavily so to show only the distant hills and sky. This seemed to be a problem since the main subject of the image at least the main focal point when taking this is the blue indigo in the very near foreground, literally only about 2 feet away. That is what is focused on and the far distant hills slowly faded from focus. It was shot with a Canon 17-40mm f/4L lens which is a very good lens with good resolution. But the part that was going to be enlarge tremendously was and is not in sharp focus. This concerned me. Of course I look at things like this with not only a photographers eye but now with the creators eye! Would it be as good as I wanted? Could it be enlarged that much and still hold up in things like detail, contrast, color, and just general great appearance? I was not sure.

After I had spoken with Chris Prouty the exhibit designer and my contact person I voiced my concerns and wish to make sure this would reproduce in a very good way. I submitted the image to him and he in turn got it to the printer who would be not only enlarging it but printing it on what is basically rolls of vinyl wallpaper. The printing would be done by a company in Shawnee Mission Kansas, Dimensional Innovations. They would be in position to make a final determination on the enlarged reproduction quality.

Well like many things, most of the issues were simply the unknown to me and when work was done things turned out to be just fine. Actually better than fine. This snapshot here that I took last month when I finally made it out to the museum to see this for myself by no way does it justice. It is truly a wonderful scene and the Kansas Museum of History done a great job in truly making you feel like you have just walked into a bit of Kansas history when viewing this.

You can see noted Kansas figures standing among the winding yellow brick road all leading back to the flint hills and additional Kansas scenes depicted on the postcard. It is really quite a nicely laid out scene.

I was not able to see Chris on my visit that day but plan on returning just to say hi and thank him and the Kansas Museum of History and Kansas Historical Society for doing such a great job in not only showing the beauty and history of our great state but for also giving me the opportunity to be part of it. Thank you all. 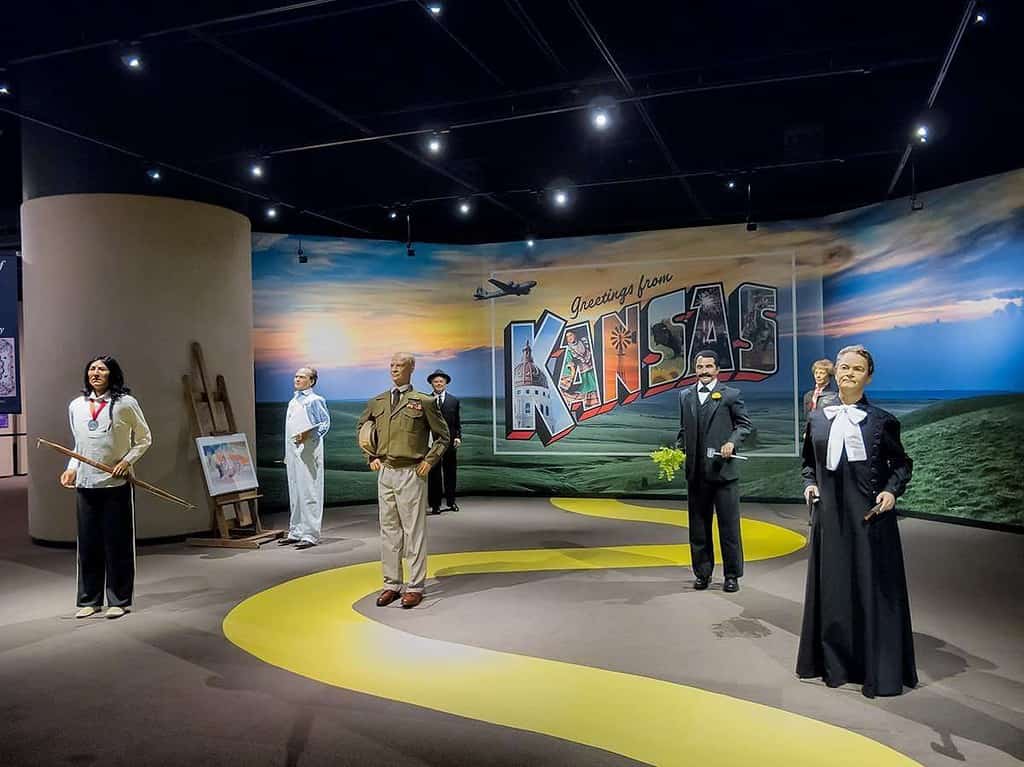