Fire On The Prairie

Fire On The Prairie 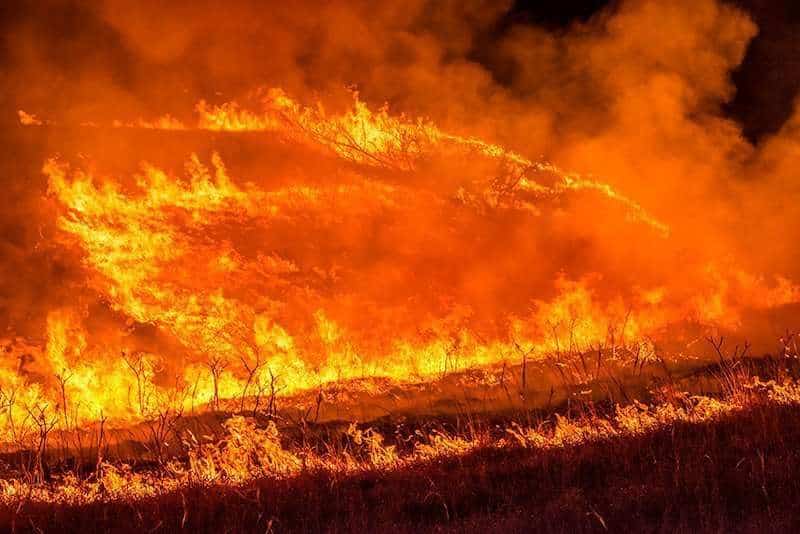 The first Saturday in April became one of fire and smoke to put it lightly. I have mentioned the last few weeks the season of prairie burning was quickly approaching and boy did it get here with vengeance. Articles have appeared in local papers and a few from neighboring states, Nebraska most notably.  The land of the South Wind didn’t disappoint. It may have irritated our neighbors to the north but it shouldn’t have come as a surprise. This practice of burning the nations grasslands particularly the last remaining stance of tallgrass prairie in North America is one that is vital to the well being and longevity of such an ecosystem. Without proper maintenance by fire it would soon be as forested as the Ozarks with a large percentage of the woodlands dominated by specie such as red cedar. Not a pleasant landscape for a prairie or the production of beef which is the mainstay of these prairie lands. 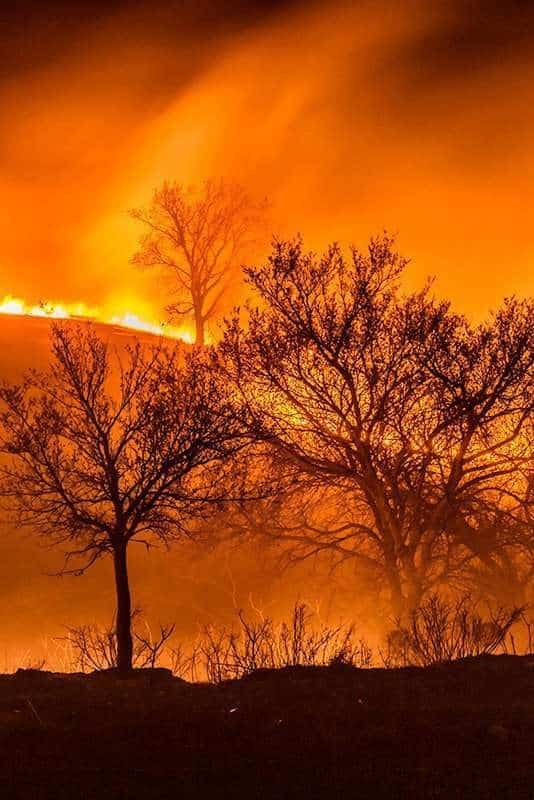 Fire and smoke have rolled across the Flint Hill region nearly everyday since the last of March and there are still many areas that may still have plans of being burned. Time is growing short with the warm season grasses such as Big and Little Bluestem, Indian, and Switch grasses (just to name a few) beginning their annual growth.

Josh and Gwen Hoy own and operate a 7,000 acre ranch near Clements, Kansas, The Flying W Ranch. Besides the raising of grass which is in turn needed for the raising of cattle they have developed quite a tourism business. Centered around ranch life and the work that is done to maintain such an operation their efforts have become well known in these parts and beyond.  I would encourage checking out their website and explore the great many activities and accommodations they provide. I have to say, personally I appreciate tremendously the work and effort they do in promoting such an important lifestyle that is crucial not only for us who enjoy such things but, to the entire historical way of American life. 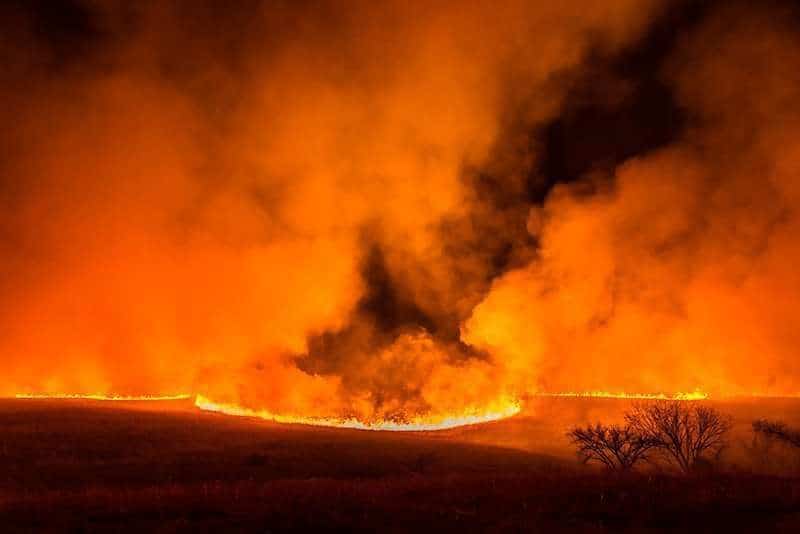 In early spring the big event is known as “Flames In The Flint Hills“. My first experience with this event was in 2011. I knew then I would be returning and hope to make this a regular event to attend. 2014 was even more spectacular than before. With weather cooperating last year the prairies are full of their notable grasses.

The afternoon starts out with some general meeting and greetings of fellow travelers. Josh and Gwen introduce themselves along with their young daughter. They explain some facts about The Flying W Ranch and what participants can expect. A talk by fellow rancher Jan Jansen who originally started The Flames In The Flint Hills public event. A talk from Brian Obermeyer of the Nature Conservancy Kansas Chapter followed. Along with a talk and historical facts and personal experiences from Jim Hoy, Josh Hoy’s dad. Jim is a true cowboy in every since of the word. Not that others are not but, when you think “Cowboy” a look probably comes to mind. A rugged no non-sense type of personality and demeanor. That would be Jim Hoy. A very interesting note about Jim is he is also a professor of English at Emporia State University! A well rounded individual to say the least. Here is a picture of Jim Hoy taken by fellow photographer Jason Soden.  Jim Hoy.

The afternoon burn began around 4pm. A way to introduce folks to the idea of a cowboy on horseback handing you matches and telling you to start the land on fire. Which is a somewhat perplexing idea to begin with. Participants get the idea of what to expect and see how things develop while there is still plenty of daylight. This usually takes place on a smaller patch of land that helps get you in the mood so to speak.

An hour or so later we meander back to the lodge and camp area where we are treated to live bluegrass music. This year provided by The Tallgrass Express and prepare for a steak dinner with all the fixins’ along with homemade ice cream. Another hour or so of enjoying more music, visit and wonder the nearby lands and prepare for 8pm when… how should I put this without seeming demented? Um, apocalypse begins but, apocalyptic in a good way if you know what I mean. I’m not sure how else to describe this years night burn. It was at times, overwhelming! 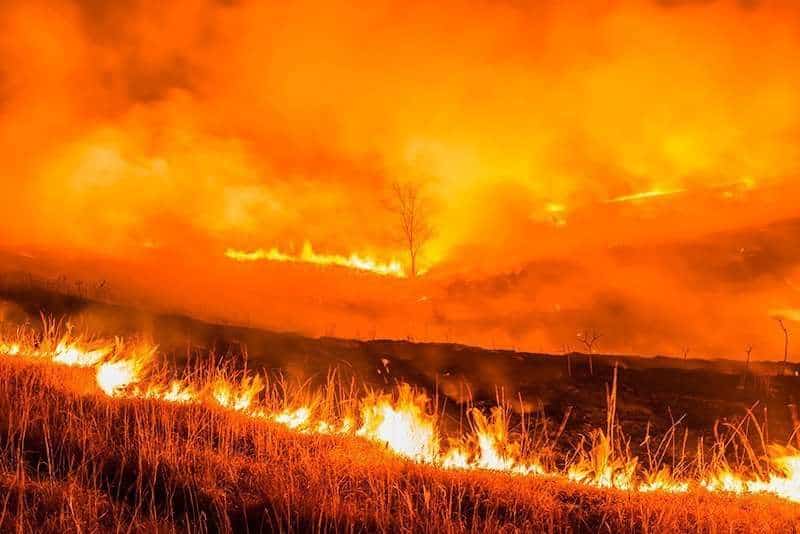 Even though there is more than an hour of spectacular sights, sounds, smells and the general filling of every sense one owns time moves quick, very quick. Grass fires are hot, extremely hot. They move with the force and speed of stampeding horses across the open plains. Eyes must be constantly moving so these so called “Red Buffalo” don’t swallow you up in the blink of a smoked filled eye. I don’t want to sound overly dramatic, everyone is made well aware of how and when to be on the lookout. As Josh tells, if there is any doubt go to the black. Meaning go to land that has already been burned where fire can no longer encroach. Common sense is the name of the game at this time.

What was initially expected, on my part anyway, was capturing the rolling flames as they made their way up and down the hills. This still was attempted but, I soon found myself photographing tremendous expanses of fire, smoke, reddish/orange light that at times completely filled the frame of my camera. As darkness overtook the sky this fiery glow became so intense and quick developing that for every shot that was made 5 went unmade only to be replaces with the next orchestrated dancing of white hot flames moving to the crackling sounds of the flaming grasses.

It was an afternoon of great comradery. An early evening of great food and entertainment. A night filled with backgrounds of flaming prairies. Where else on earth do these three come together in such force. It must be quoted here, “There is no place like home.”

New images from this years event have been added to the gallery. View these and past images here: Flames In The Flint Hills.

Related articles across the web