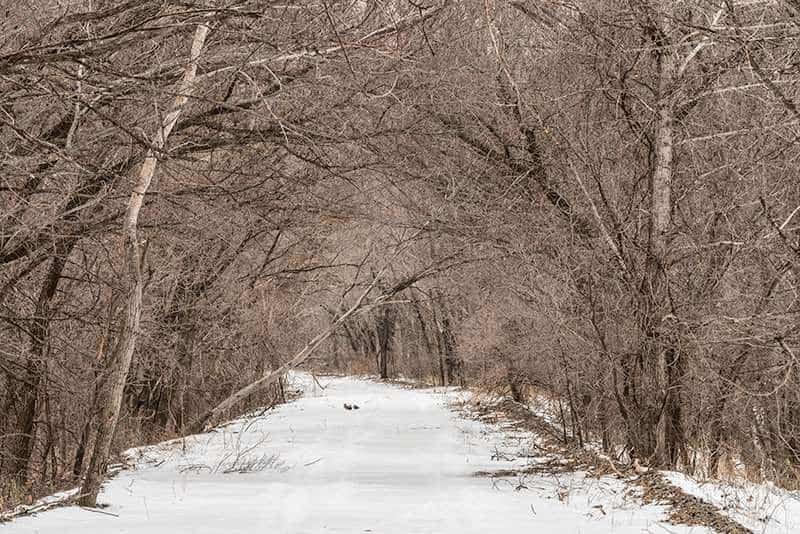 As I had mentioned in the last journal update I managed to make it out into the frozen snow covered prairies a couple of days ago. I actually done some hiking on both Saturday and Sunday. With the landscape being mostly white it can make the image creation somewhat challenging. I have a tendency to be drawn towards lines and forms of the lands more than specific details of subjects during these times. That being said when an opportunity presents itself I try to make myself ready for whatever it may be. That was the case Saturday as I being a hike on a section of The Flint Hills Nature Trail.  I will forego more insight of the nature trail for now but take a moment to check it out from the link provided. This nature trail will undoubtedly become a frequent destination for me in the future and I will provide more insight and photos of the visits I plan on making. 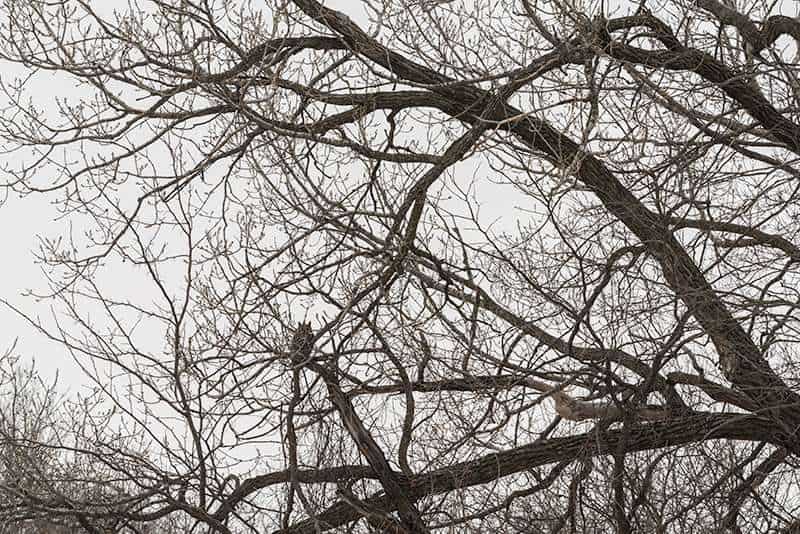 I began a hike at a trial head in Morris county late in the afternoon around 4pm. With approximately 2 hours of daylight left I knew I wouldn’t be traveling to far but, new territory is always exciting to explore no matter how far one plans on traveling. The first half mile or so was bordered by woodlands and agricultural fields on past the trees. According to Google maps a mile or so up the trial would open into vast rolling Flint Hills and prairies. I also had noticed I would be crossing a creek along the way and this was something I would be stopping at well.

I approached the bridge crossing the creek some 30-40 feet below and as the sound of snow crunched under my boots a surprise swooped across the creek from one tall tree to another on the opposite side. I knew as I spotted this feathered friend that it appeared to be an owl. I’m not particularly good at judging distances but I would guess it landed some 20-30 yards away.

I had come prepared with a 70-200mm lens on the camera knowing I would be attempting to pick out distant forms in the landscape. It was a heavy overcast day so there would be no vast views with blue skies to be had. More intimate images were on my mind and that’s what I would be concentrating on. 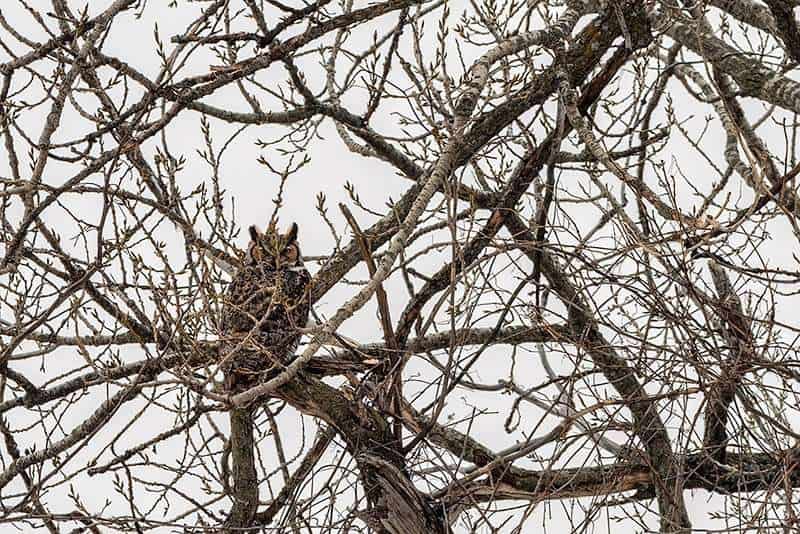 Well, my little (or in this case good sized) feathered friend changed that up for about a minute as it set on the distant tree branch paying as much attention to me as I to them. I zoomed in all of the 200mm that I could and made a few captures. Even zoomed in I had a hard time determining focus as I quickly made four separate exposures. I really couldn’t even tell if it was facing me or facing away though I could see it head rotate directions. This turns out to be a Great Horned Owl most noticeably by what appears to be horns of feathers sticking up on it’s head. What an absolutely wonderful sight even in the distance.

A minute later it was off, silently heading down the creek to a more secluded spot away from my prying eyes. I never go out in search of such wildlife wonders but when I come upon them they always brighten my time out in nature. What a wonderful experience even though it lasted only a couple of minutes total!

The first picture you see here is of the beginning of this trail head winding through the woodland areas. The other two pictures are the same shot. One of the original full framed capture that gives a little bit better scale of the scene zoomed in at 200mm and the other as you can see a highly cropped in look.

[box] I will be sharing more from my initial visits to the Flint Hills Nature Trail and look forward to many more wonderful visits.[/box]