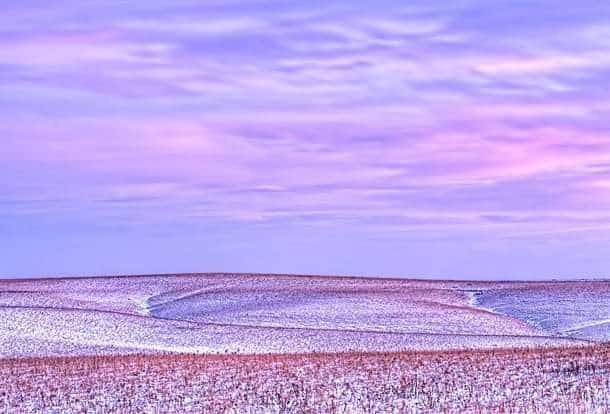 Sometimes chasing the light is fun and you win, other times it’s best just to stand and watch it happen.

I had taken a late afternoon drive into the snow cover Flinthills. A foot of snow still could not hide the power of the bluestem, Indian and switch grasses, along with many other flora powerhouses of the prairie. My plan was to find a section of distant hills looking to the west and photograph the winter sunset over the flinthills prairie, silhoueted hills, colorful sky and snow covered tallgrass. That attempt was made and captured. My position was based and somewhat limited to drivable back roads due to the recent heavy snowfall.

As the sunset, I began to notice my position somewhat distant from my planed shot. My attention turn to the more subtle view of the eastern sky. This section of quiet hills began to receive the benefit of the setting sun to the west. The streaming cloudy sky, the gentle roll of land all turned into a painters palette of mixing blues, pinks and magentas above the golden tallgrass.