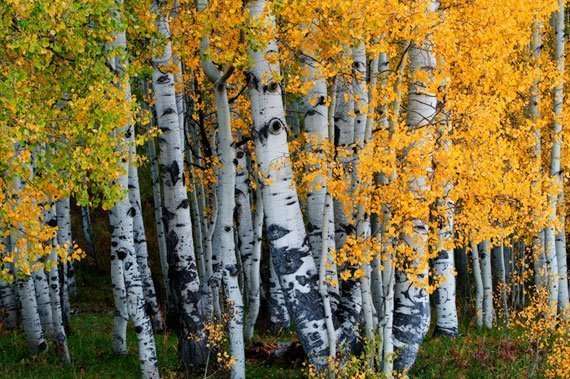 Going through my many images taken in Colorado I start to remember a few of the things going on at the time of the shots were taken.  This is an image taken after sunset the trees had fallen into shade and this group of aspens were behind were I was standing and had been shooting the vast mountain range in the distance.

There were 3 other photographers right in this area and actually we were only a few yards apart during the hour or so as the sun was setting. What I remember was the conversation going on between the 3 other photographers during what is the peak light time of our photo endeavors. All had nice camera gear set up pointing in the same location I did but for the entire time none of them took any shots. These gentlemen obviously new about photography and seemed just as thrilled as I to be in such a wonderful location. For the entire time their conversations revolved around camera equipment gadgets, gizmos and software. Boosting of their knowledge and expertise of each. I actually found it somewhat enjoyable to listen to even though I didn’t join in their talks, I was to busy taking pictures! It just struck my how they all took the time, effort and expense of coming to this far off location and then just stand around and talk about taking pictures but never actually taking any. Granted they may have been taking shots all day and this was no big deal to them at the time. It was during turning my attention to this group of aspens behind us that I realized they had not taken any shots but boy did they know how to talk the talk.

We each have our own way of connecting with nature and to our fellow man and that’s a wonderful thing. After making a few of my last images of the day and the darkness of the night had fallen to the point where even 30 second exposures weren’t long enough I packed up my equipment and headed to the car to get some rest while breathing the cool fresh air of  10,000 feet and dream of the morning sunrise among stars. And in the darkness I could still hear the talk of gear going on. Memories of and experience are just as important as capturing a scene with a camera, but I’m still glad my memories were made along with many images as well.