Are You Planning To Fail?

Are You Planning To Fail?

Be patient toward all that is unsolved in your heart and to try to love the questions themselves like locked rooms and like books that are written in a very foreign tongue. -Rainer Maria Rilke

You may be wondering which way am I going to go with this? The way I see it, there are two choices when asked the question, are you planning to fail. First, you may think the only smart thing to do is to never plan to fail. And with that you would be doing yourself a great disservice. That leaves the other option, that being, plan to fail.

You may think that planning to fail will only lead to failure itself. Here’s a little insight on living. We all are going to fail, many many times. Most likely way more times than we will ever succeed. Whether we plan on it or not. Wait, what?

There is failure in the very post. Failure to post it when I had planned. I wrote these thoughts about failure a week ago with plans on posting it the following day. But, things happen, life happens. Things come up and take us for short trips down unforeseen roads. We deal with them and then make our way back to the road we want to be on. It’s not right or wrong, maybe it should not even be considered a failure, but to me it feels sort of like one.

Nothing bad has happened because I didn’t post this when I wanted. No bad event took place because of it. It’s just one of those things you wanted to do and didn’t. It didn’t effect anyone (that I’m aware of) but me. But isn’t that what we all strive to do? Effect our own lives and somehow make them just a little better when we can. It might be taking time for some needed rest, expanding our knowledge of self improvement techniques, or maybe publishing a blog post when you had planned. Whatever it may be, never disregard the power of a small step. For most of my adult life I have felt one can not help others unless they help themselves first. I have stated this to others who thought it to be very selfish. I really don’t care. I know it to be the truth.

So with that little digression of the last two paragraphs thrown in, now that I can get this posted and  send you back to the remainder of this previously written post.

There are countless documented examples throughout history of failure after failure before a tremendous success was made. These are no little successes and include things such as, electricity, the lightbulb, nuclear power, and life saving antibiotics. Would any of these have happened if those involved quit after they failed a few times? Obviously no.

So what’s the big deal about failing? The big deal is it makes you feel bad to fail. So in order to not feel bad you stop doing what you failed at. But what if you really like doing something that you failed at? Should you quit anyway? That’s were the personal choice comes in. No one can answer that but you. But my vote would be for you to not quit. You know the old saying, “that which doesn’t kill you only makes you stronger”. Yeah, that type of not quitting.

Do not now seek the answers, which cannot be given you because you would not be able to live them. And the point is, to live everything. Live the questions now. Perhaps you will then gradually, without noticing it, live along some distant day into the answer. -Rainer Maria Rilke

When thinking of these things one must conclude failure is not an option, it is a prerequisite. Only through trial and tribulation does the light that one seeks begin to shine. First, ever so slightly through the darkness of failure. But onward you go. Then slightly stronger through the still present darkness. Still onward you go. Finally, after what may seem like a lifetimes does the light begin to ever so slightly illuminate your surroundings. At that moment, all the previous failures begin to fade into the darkness in which they live.

Tales such as this are dotted throughout history. Such as the case with one of the greatest novels of all time. Only becoming recognized worldwide as a success some 70 years after the authors penniless death. The author, Herman Melville. The book, Moby Dick. Even in what seemed to be certain failure well past his death did that “false” failure fade in to the darkness to be replaced with tremendous success. The only question this specific example raises is, do you have to experience success for it to be considered success? I’m still pondering that question, but it does seem one can become “successful” even after death.

The act of living seems to lie somewhere between great success and tremendous failure. The areas of small successes and little failures so to speak. This is understandable. It takes great effort to achieve either. But that should not stop us from achieving the small ones along the way. A journey is simply one step at a time over and over. We can always stop and rest, but we must not stop for good for the destination will only live in our minds with no experiences of what it took to get there or what it took to try to get there. Succeed in your endeavors or fail. The middle “grey” is the nothingness. Do not remain in the nothingness.

There are many forms of success. Maybe as many forms as there are people. The fact remains, no one can tell you what your success is or should be. I have no doubt that when Herman Melville wrote Moby Dick he experienced personal success. He may have written it (as many authors do) to help provide financial success, or at minimum financial help. That just seems to be how the world of goods and services work. You need something of value to get something you need or want from someone else.

There is truth to the matter that one can only plan based on the knowns. Hard to make plans based on the unknowns. That brings up the point of planning to begin with. Can you plan on creating art? You can plan many things. I can not say with certainty that someone somewhere planned on creating art and did. Michelangelo planned on painting the ceiling of the Sistine Chapel, but did he plan on making art? Seems like he probably would have planned on that. But we know of his life experiences that would have predetermined his approach to painting the ceiling. And that pre-determination would have been he was consciously and unconsciously driven to create art. But something tells me you simply can not plan on such things. You start, your do your best and at some point you stop. After that art seems to happen or is doesn’t.

Taking a picture can be somewhat similar. You can plan to go to the park, take some pictures of nature things, and show them on social media. There seems to be an abundance of photos that follow this plan. Some of these are very fine photographs no doubt. Personally I see these more in line with paint by number kits than with something that can be considered art. But then, maybe I should not be the one to determine such things.

All this mumbo-jumbo may sound neither here-nor-there. There may even be a high possibility this attempt to articulate the importance of failure in ones life has been a total failure. Yep, very possible. But at least for me, it was another step forward. 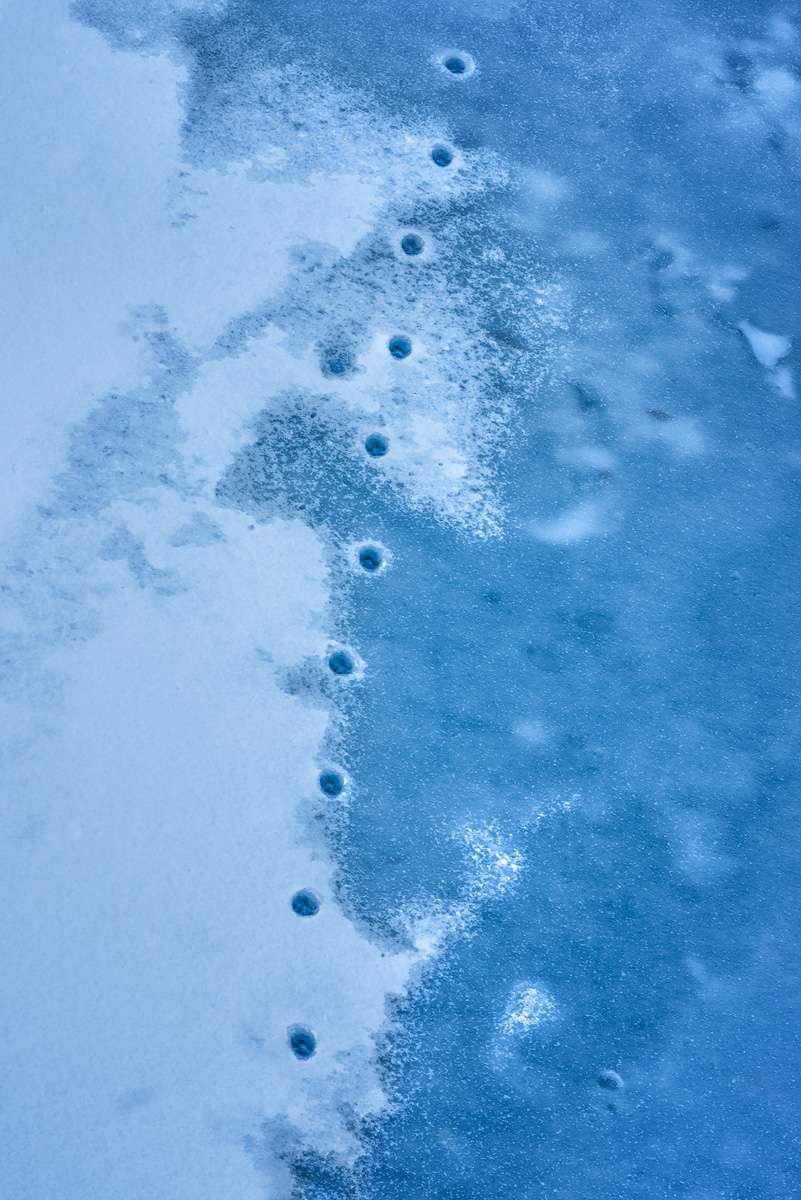 The Tracks – Wildlife tracks down the frozen and snow covered waters of Mill Creek, Kansas.