I debated just a little about this months wallpaper offer. Being March many areas are just beginning to slip out of winters grip and heading into spring or at least they are in their minds. I’m no different, I looked forward to the winter landscape the only problem with that as far as here where I live is it came rather late. Not much in the way of snowy scenes until after the first of the year and primary the last week of February.

So I wondered about a winter scene knowing the end of March may be nothing like winter (then again maybe it will be). It’s a blessing in my opinion that the weather this time of year can range drastically with temperatures well below freezing to temperature in the upper 60’s not uncommon. Well enough debating, I chose this image simply because I liked it. After all that is what this whole journey is about, sharing images and stories of what has inspired me.

Only a few days ago I spent the better part of the day exploring the wintry landscape of the Flint Hills. I really wanted to get some new images since it has been over two years since we have had substantial snowfall in these parts. I visited some areas in familiar places during the late afternoon, areas with wide open views of the prairies and distant hills but nothing seemed to move me much. I know one of the reasons was due to bright blue cloudless skies. Even though it was great to be out in such wonderful areas the opportunities for photos was remote. I usually will begin thinking about the twilight hours during these times and planning on where to be as the setting sun begins to reduce it’s light on the landscape.

I had a plan, head to an area not to far away that I know has a great view to the west with lots of open land and rolling hills. This area is in the far west central section of Pottawatomie County, the county I was born and raised in by the way. I was thinking I could be there in less than an hour.

Well, my timing was slightly off and I found myself racing to a place as the sun was setting providing some wonderful color due to a few light streaming clouds that had moved into the western horizon. With only minutes to attempt a few shots my selection of compositions were going to be very limited. Here is a the first shot from the area I had made it too I entitled Captive Audience.  I really had no intention of shooting an image with livestock in it but the more I looked at it the more I liked it. They are after all part of our landscape and an important part at that.

Six image were made before the sun disappeared which typically is not a problem and there can be another half hour or so of wonderful light. But that was not the case this time. The land darkened quite quickly and the colors faded within minutes. As I typically do I stood and watched, soaking up every moment of Mother Natures unscripted movie. And as has happened many times as well I turned around the there was the moon. Well blow me down! I’m not done at all yet, I get to play with the moon now!

I’m not really surprised with this happens it has happened countless times and I’m sure will continue to happen. I get so focused on the what is in front of me I completely forget there can be a whole lot more behind me. One of those lessons that if asked by any aspiring photographer, what is one simple thing someone can do to improve their work my answers would have to be “don’t forget to look behind you”. I may very will have concentrated more on this moon rising over the prairie if I would have followed my advice.

The land was now rather dark and the moon was becoming brighter compared to the landscape below which can make getting a properly exposed image difficult and then impossible without doing multiple exposures which I have no problem doing as long as I have the time. The light was literally changing before my eyes so I relied on my cameras histogram and a small aperture, this was shot at f/16 to keep the foreground as focused as possible and a careful select focus on the moon. It’s still not noticeable even in the larger wallpaper sized image but if this were made into a large print say 24×36 you would see detail in the moon and not just a white spot.

After another 15 minutes or so of having fun with the moon it was time to pack things up and head to the barn. As with many times when hours are spent in search of those shots that have special meaning it comes down to the last few minutes of daylight when all the excitement and fun happens.  If I could only stretch these moments out into hours ahh the joys they could bring. But then again having only a few moments of bliss makes each one that much more special.

I hope you enjoy this months offering. To purchase a print of this image click here.

You may also help support these offerings with a donation of your choice by using the Donate button in the sidebar, thank you. 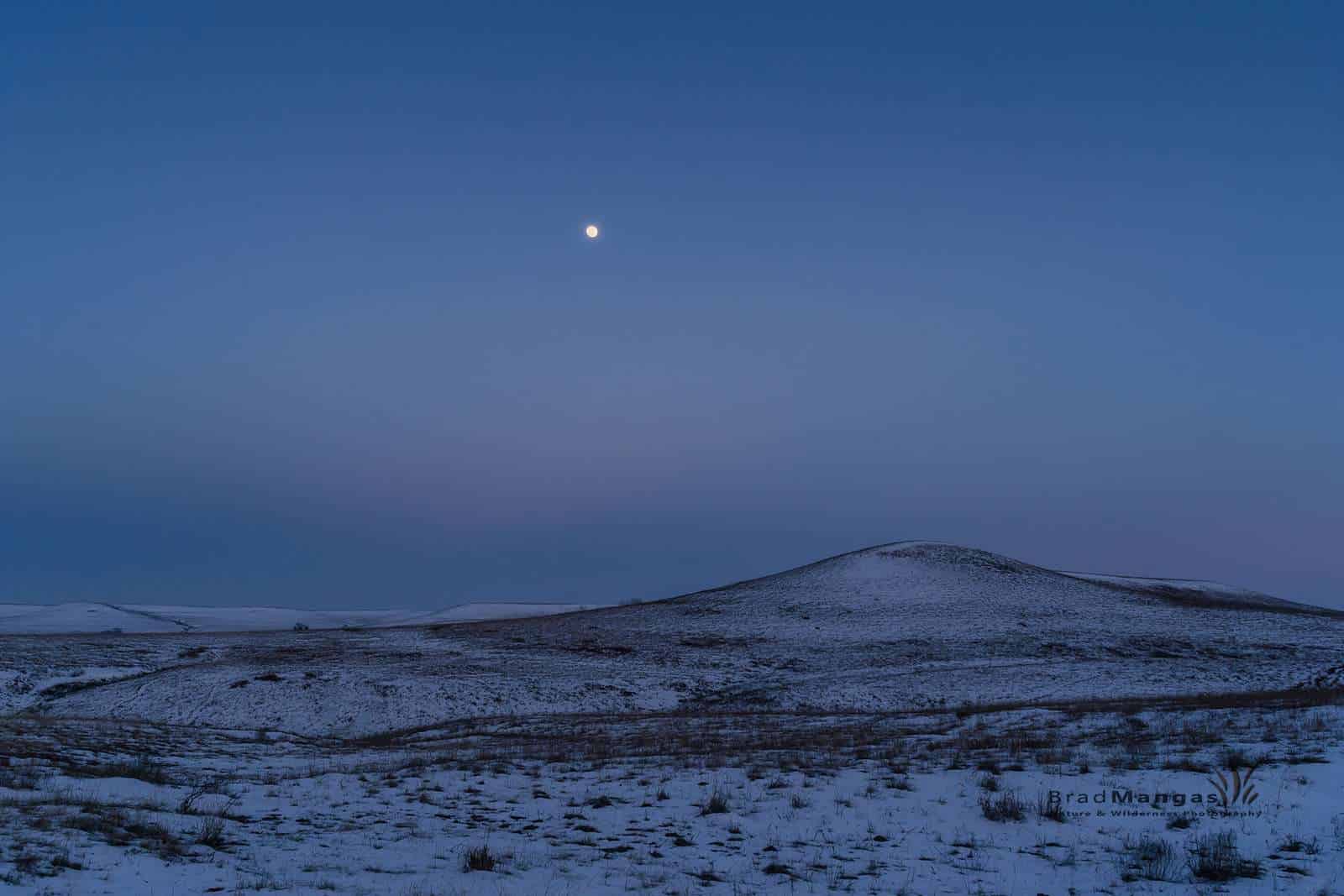