The Moment Is Everything

The Moment Is Everything

We all want to have a good day, a good week and for that matter a good life. Goodness doesn’t seem to come in long drawn out time frames as we may hope but smaller bites of moments that when put together can add up to the days, weeks and life we strive for. It comes down to recognizing these moments and being thankful for them. It’s the “glass is half full” mentality.

I’ve been kind of bummed out with the weather lately. It is winter right? The cold north winds, snow and ice covering the landscape should be abound, right? I have been looking forward to this winter in hopes of such delights. Last winter was a complete bust when it came to these typical seasonal delights. So before the winter times hit this season I decided I was going to make the most of it and brave the coldness in search of new opportunities.

Well, we have had a couple inches of snow so far but that has been about it. Yes the cold comes and goes but the dry lands remain. I selfishly want moisture for my own use but the need goes well beyond what I want it for.

As the temperatures began to rise last week I thought I better make it to some local watering holes while I still had a chance of ice being around. I’m kind of into the “close up” mindset at the moment since the big wide open landscape look isn’t doing much for me at present. The temperature last Saturday here was expected to get into the 40’s so I knew what ice was left may disappear quickly.

Saturday morning I was up and out a little after sunrise to a local pond surrounded by woodlands. I figured it would be a good place to look for intimate subjects such as leaves hopefully still frozen in the icy grips of winter.

I wasn’t disappointed, besides make a few images it allowed me to get that feeling back, the one that says, hey this is fun, I love being out here in nature with my camera no matter what the weather. I mention that because sometimes that feeling is elusive and even though I always look forward to being surrounded by nature the creative part comes and goes. One thing I have learned over the years is that unless I put myself in places that can allow it to happen it surely will not.

I started the morning by watching what must have been hundreds of Robins along with a few Cedar Waxwings getting their fill of water from the open areas along the pond. It was really fun watching them come and go like smoke blowing in the winds. I attempted a few pictures for no other reason than to be able to look back at them and remember that enjoyable time.

After watching my feathered friends for 30-45 minutes or so I wandered to a second nearby pond which was much more open but had a nice amount of ice covering the northwest side. This is where I found my preconceived subjects, frozen just as I had hoped. I had left the 70-200mm lens on planning to set up and capture close up views.

There wasn’t an abundance of these I found myself drawn to but enough that I spent the next hour slowly walking the edge and studying all the nuances associated with things like ice, frozen mud, leaves and things.

I never really know how an outing like this will turn out but more times than not it turns out beneficial to me whether any keeper images are made or left for next time. 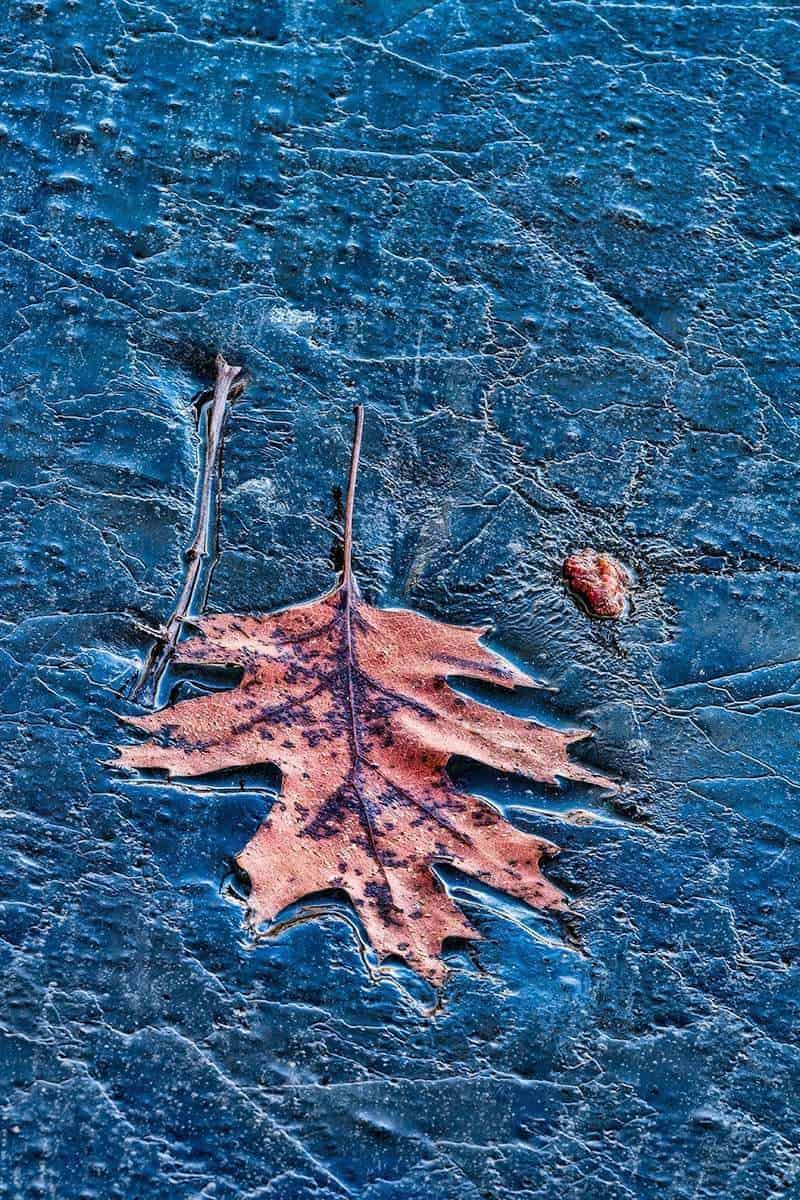