I’m finding myself with new images in my Lightroom library at the moment. I hit the landscape with more frequency over the last month or so with those images now sitting, waiting, wondering what I am going to do with them. Like a new puppy waiting to see how their new keepers will be, friendly or very strict. Not sure how I just came up with that analogy but hope you get the just of it.

I am not a strict pet owner, Lexi our loveable Lhasa Apso, pretty much gets her way with anything she wants, she amazes me with her understanding of what is going on in her home, anyway back to photography, I am not a stickler for exactness in my imagery either. When processing an image I have a simple starting point that most all images go through but after that, all bets are off. I will take the image in the development module of Lightroom which handles my raw files from the camera ( I use to do this through ACR from Adobe bridge until I added Lightroom to the mix, which is a terrific raw file editor) preform a clarity and vibrance adjustment and if need be profile the lens if I think the image needs it, maybe straighten a horizon as well, then take it straight to Photoshop.  There may be a few other tweaks I do from time to time to the raw image file in Lightroom but for the most part that’s about it.

Photoshop is my playground, there are no rules on what should or shouldn’t be done to an image. This is the time one should explore their creative side, what you like and what you don’t like should be the end result you are after. This line of thought could very easily turn into a long drawn out debate in itself, the age old questions of image manipulation, color adjustments, cloning, black and white conversion and the list goes on. Some think a photograph should be a depiction of reality, this is, in my opinion not even possible due to many reasons relating to the the science behind the photograph but oh well to each their own. Do what you like and don’t get caught up in what you think “others” will think. Your images belong to one person only, you, make them reflect that.

That thought process meandered through my mind when working the image up that I have provided here. It’s one from my morning along a local creek when I went in search of fallen leaves along the waters edge. I have worked another image up and have added it to my gallery site in which I found myself going down the same line of thought, that being just have fun and make it look the way you want. I had a lot of fun that morning capturing these images and basically just hanging out in a couple of places I have found that provide rather large gravel bars that one can get down to the water and walk along. What I found interesting and to honest somewhat disappointing were the images once I started going over them in Lightroom. Nothing really moved me much, they seemed rather boring. I did work the first one up fairly quickly but only when I started taking some extra liberties with it. Those liberties where found in the Nik Color Efex Pro 4 plugin and know as recipes, something new for version 4. That recipe is know as “black & gold”, I didn’t start out thinking this was what I wanted to do with the image but after not being able to achieve a look I like with an image but still wanting to because I still like the image in general I will begin to experiment a bit, everything from color, contrast, black & white, Orton effects and so on. Sometimes it works sometimes it doesn’t. In this case I like final black & gold effect on the oak leaves.

As far as the image here this is again derived from such an experimental venture, this time with the help of of two photoshop plugins I utilize, Topaz Adjust 5 and Nik Color Efex Pro 4. Both were utilized to come up with this final result, in Topaz Adjust a “Spicify” preset was applied and then in Nik Color Efex a recipe called “Soft Landscape” was applied.  I think the photography purest would have a fit, not only have I used image manipulation software I have doubled up on them, I manipulated a manipulation! I know, my credibility is screwed now that I spilled my guts, no one will ever take my work serious, guess I will just take up painting, you know where you can literally make up any scene you want from the comfort of your own home and people will still take you serious, how great! 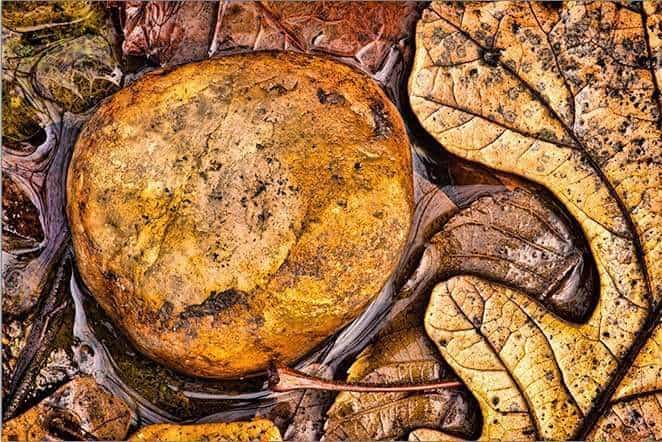