There is no doubt that this time of year at least in these parts and from my experience I find it much easier to make photographs than any other time of the year. I noticed this last weekend while out doing my old man thing were I drive like 5mph looking at everything except the road, hey I’m only going 5mph OK.

There’s a stretch of road on the north side of Melvern Lake for all you local folks that runs oh a few miles or so turning from pavement to gravel about half way down. I discovered this little gem of a road in early spring. Not that I hadn’t ever driven it before to the contrary, I have driven it many times over probably 20 years or so, made many trips down it back in my “gone fishin'” days. But last year I drove it early one morning at just the right time of year I reckon. The grasses along the road and out in the more open areas just seemed to really light up and caught my attention. One thing that I must realize is now I almost always look for and notice things like this, years ago I was probably just looking for a path down to the lake.

This particular afternoon I decided to check this area out just to see if there might be something worth a picture, my plan initially was to continue on and end up further west and possibly at Tallgrass National Preserve. I would have had just enough time to do that if I didn’t spend much more than 30 minutes or so around the lake. I drove this stretch at about 3pm, the sun was still relatively high with sunset scheduled around 7pm or so, but I couldn’t help but notice the lush look of the grasses and trees. Even at mid afternoon things lite up enough to make me do many double takes as passing by. I had to decide, leave and continue on or stick around and see what I could do here. It didn’t take much for me to decide the latter. I wasn’t necessarily looking forward to a longer drive and I have been in this position before, thinking things will be better if I just go on down the road, seldom has that been the case. I have learned over the years that when things look good in one area the chances of things being better elsewhere are slim. It comes down to this simple premise for me, do I know how to photograph an area or not? If I don’t then I need to continue looking for that perfect point and shot spot where I can just snap the picture and everything’s great. Or, pay attention to where I’m at and let the land tell me how it needs to be photographed, OK that sounds very cliche like and honestly I don’t even know what that would mean, but non the less I felt given an opportunity things would be just fine right were I was at.

A little more scouting and planing over the next couple of hours was much more relaxing and enjoyable than driving. A few places to get out and take a little hike off the beaten path is always fun and I find times like this good for checking out possible macro opportunities. Macro shots didn’t happen this day but you never know if you don’t look.

As the sun started making it’s way lower in the sky I made my way to the far east side of this road and slowly began to ease my way westward. This road is almost straight east and west in direction so the sun was setting on the south side of the road which was perfect because this is where the potential images would be out in my mind anyway, lots of Indian grass and fall colored trees lie all along the south side of this particular stretch of 1 mile or so.

Not many images where taken but the few that were I tried to pay close attention to a couple of things, first was flare, this can be a problem in strong light mostly when one is more head on with the light but non the less the light at times was strong and I was trying to shoot at around a 45 degree angle to it, I didn’t need the dreaded flare monster messing things up. The second was the sky, I wanted no sky in the images it would have added nothing to the scene and with it as bright as it was it would have just been a blown out white area anyway. A few exposures was made at 3 different stopping places and a few more just for good measure.

All the images made that late afternoon were shot with a 24-70mm lens and most at 70mm. I had an urge to change to my 70-200mm so I could get just a little close and prevent as in this case the need to crop the bottom of this shot. I was standing at the edge of the road which I needed to be due to it being higher than the land to the south and provided a slight downward look helping to keep the sky out and at 70mm I couldn’t quite reach in to where I wanted to start the composition. But, it is very dry and dusty in these parts and the changing of a lens here in the field wasn’t particularly appealing to me, plus I like the overall width 70mm was giving me, another instance of give and take, one wouldn’t necessarily be better than the other in this case.

I was pleased with the result of my decisions that day, it helped to reassure me that patience can be rewarded and enjoyed as well.  The result of this was literally being able to see the light, which I thought was very cool. 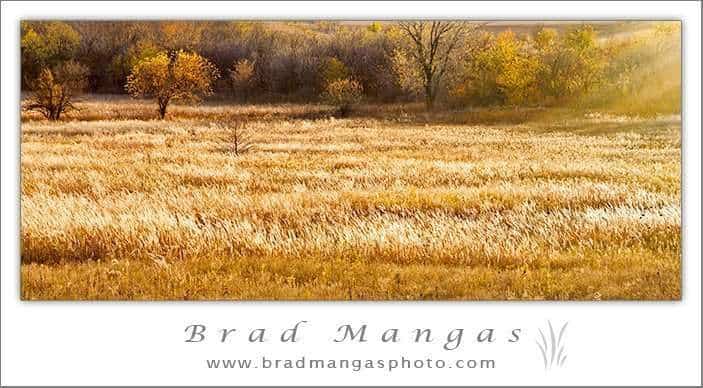