Look up at the stars and not down at your feet. Try to make sense of what you see, and wonder about what makes the universe exist. Be curious. -Stephen Hawking

I think it’s safe to say most of us feel as if there is just not enough time to accomplish all that we would like. I’m sure there are as many reasons as there are those who feel it. Restraints on our lives can become frustrating to say the least. It becomes more important during our days, weeks, months and even years to attempt to priorities those things we must accomplish vs. those we want to accomplish.

Wants and needs sometimes walk a fine line next to each other and it can be hard to distinguish the differences. I have been walking this fine line the recent weeks with my own wants and needs. I recently (the beginning of spring in these parts) updated all my camera equipment. Not only did I replace gear that was at least a few years old with nice shiny new stuff I even changed from Canon to Nikon, now that’s a change.

I had for the most part been happy with the Canon gear I had and had no intention of even upgrading it until a time where I felt I could not do the things I wanted to do with it. I made a decision (and yes this all falls under the category of wants) to begin pursuing some nighttime photography, night skies, stars the Milky Way and such. I owned Canon 60D a couple of months ago and had used it periodically the last year or so to attempt such photography will less than stellar results. The need for high ISO is a must when doing night photography and I had found the limits of the 60D. So after much research and narrowing choices down to basically three camera bodies, a Canon 5DIII, Canon 6D and Nikon D800 the choice was made. Then another slight alteration was made to that and I decided on the Nikon D800e. Wow it was almost stressful! With the choice of the Nikon I then needed to have the lenses for it and without going into all that I have done to decide on those I now have the Nikon D800e, Nikon 24-70 f2.8 and Nikon 70-200 f4. As far as the Canon gear all I can say is thank goodness for eBay! I hope it all continues a long and happy life.

I won’t go into the comparisons of such cameras or lenses there is much info out there for anyone to do their own research and make their own decisions but for me, after the first thousand images were made I can say I am very happy with my decisions.

OK, enough gear head talk. I have mentioned previously that I also have decided to take great control of my health in the way of proper nutrition and the need to get at a more healthy overall physical state. The last couple of months I have been devoting much time to this goal as well with results that have been very satisfactory.

Now along with those things, two months ago my youngest son joined the United States Marine Corps. This has been a very positive refocusing of needs. Time has been spent I’m sure like most parents, thinking and probably even a little worrying about the journey he has undertaken. Letter writing on a regular basis has been an utmost priority. The need to see and reaffirm my love for him as well as his two brothers and sister has taken front seat to most all other things these last couple of months. All has never been better in those aspects of my personal life; I am truly blessed to have such great kids.

During this time I have not forgone the personal need to include nature and photography in my life and have spent much time in the places that help to instill peace deep into my soul. I was somewhat reluctant a couple of months ago to venture out into the wilderness alone thinking time should be spent in more sharing ways with others. I soon found out that the best thing I can do is to be healthy both physically and maybe more importantly mentally. After a trip back to nature and some time spent alone I knew it was exactly what was needed to accomplish the needs I have.

Sometimes one might have to actually force themselves to do those things they know are needed but have trepidation in doing. If that is the case the best advice I can give is to do it, now, as soon as possible and let yourself be moved by the things you love. It will let those feelings build and you will have a wealth of great things to share with others as the result.

Well, have I rambled on enough about what I have been up to as of late? I do have a trip to San Diego planned the middle of July with my oldest son to attend the new Marines Graduation as well. Boy am I looking forward to that. Sometimes I feel as if I’m the luckiest person on Earth and for good reason. In my mind I am. 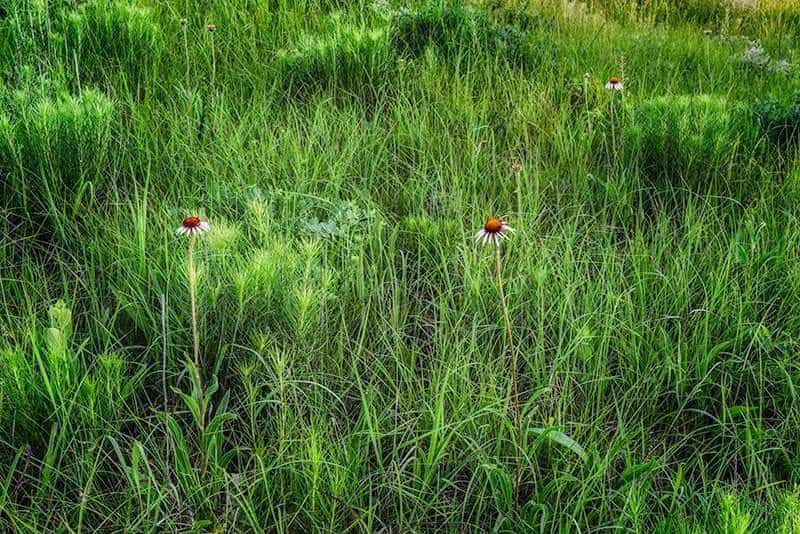 Purple Cone Flowers on the Prairie

So how about a little photography update. I have made numerous trips out into the Flint Hills the last few weeks with each one better than the last. The rains of this spring have made the prairies abundant with growth of grasses and wildflowers! Yippee! The D800 and I have become close buds these last few weeks and I think we are really growing on each other. I have yet to begin some serious night photography due to the weather (clouds that is) not exactly cooperating when I have wanted to go out but that will change I’m sure. The Milky Way from now till the end of September will be rising higher and higher in the skies giving me many opportunities to expand my horizons into the world of night photography.

Yes, time is precious and the needs out way the wants as they should but, we must have hopes and dreams in order to turn the things we love into the things we need.