Look Before You See

Look Before You See

Seems rather straight forward I would think, that of looking before you see. What I’m getting at with this is the process of looking and not taking for granted what you think you will see before spending time truly looking at something. A glance many times does not tell the full picture and can even be deceiving when it comes to your photography.

Case in point; I had arrived at a location that was somewhat familiar to me. A high point out on the prairie that had provided a couple of nice images over the last year or so including one of this obvious unique little find along the fence row next to a seldom traveled road.

Both images taken with a wide angle lens which is usually on the camera 70-80 percent of the time. I am conscious of the need to not limit views to only the wide but the need and desire to create more intimate images of landscapes which can be done many different ways. One would be the obvious and that’s to get up close and intimate with your subject. The second is take the wide angle off and go for a medium to long telephoto lens. The results of those in no means produces the same outcome and in fact can produce a drastically different outcome that could in many ways have little in common. I would suggest when possible to experiment with these techniques and see for yourself the differences. This subject could be a good topic for a future post on the differences. But to put it in quick perspective, background, depth of field and framing will determine most of the differences with a wide angle accentuating the nearer subjects and the telephoto accentuating the more distant subjects such as the hills, mountains, trees or what have you in the background and thus become more dominant in the image.

Sometimes, such as in this case the proximity to the subject was out of my control. I couldn’t hop the fence and run down the prairie to get close in hopes of using a wide angle in attempt to frame this scene. That little thing about trespassing on private land seems to put a stop to that rather quickly for me. So out came the telephoto to begin the process of looking.

The light at this time was wonderful, the sun, 10 minutes from setting was almost 90 degrees to my left and casting a wonderful soft orangish glow on the land. I had spotted the very distant lone tree minutes before that I don’t believe I had even noticed on previous visits to this area. It looked interesting and I usually investigate the lone trees of the prairies for the simple fact that they make wonderful subjects as if standing guard over a vast view, I think of them as Sentinels of the land.

What surprised me was the different look the scene took on when framing it in a view finder of a 200mm lens, it was no longer just a lone tree but an intricate part of a grand landscape. The Sentinel made it’s appearance. There were a couple of other important aspects that all made this work for me. The lines of the foreground slopping hills gave contrast and detail along with the timing of the sunset to provide such encompassing color to the sky. This scene, hundreds of yards away suddenly became a photograph.

There is no secret to seeing such things, I’m not sure there is even much talent to the process but what I do know is that you have to take the time to look before your going to see it. 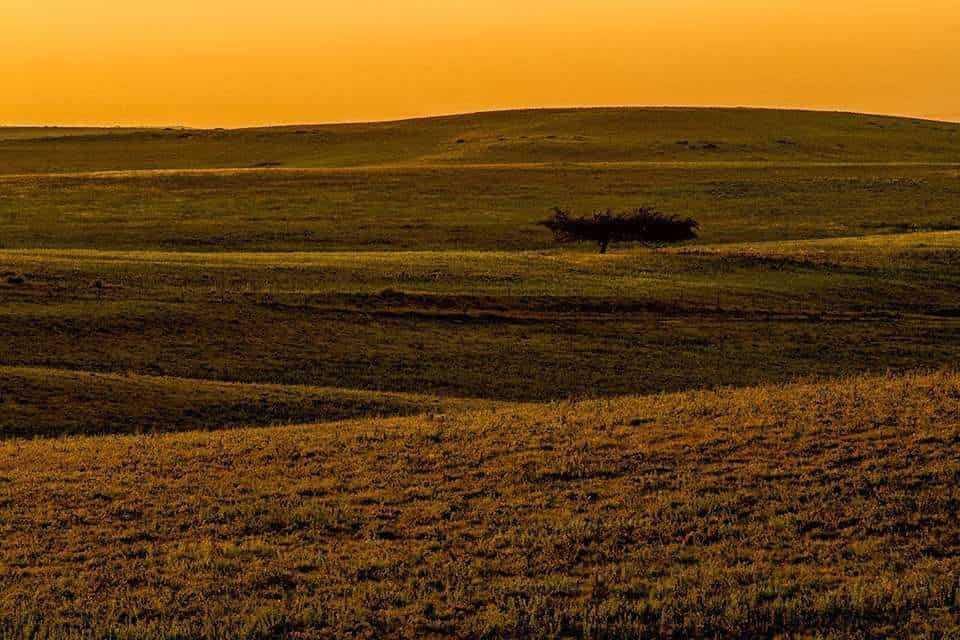