Thought I would go ahead and get a post on here today. Not a whole lot of new photo news as of today.  I did start playing around with my new endeavor last night. The one I mentioned you would know as soon as I posted an image here.  It’s something I want to try and it will keep me occupied during these long cold nights the next few months, and then SPRING! I know shut up already!

Here’s a hint, the subject is something I started collecting many years ago, and of course I think they are cool, and so do most little boys. For that matter I guess I should say many big boys who think they are little boys as well.  I made a few shots and am finding out it’s going to take some effort to get the results I want. And it’s possible I won’t get the results I want. It’s going to be a challenge and that’s good. I’m not an artist I’m a photographer but this will push my artistic abilities somewhat. Hopefully within a week or so I will have something worth sharing.

I did make it out into the great outdoors a bit yesterday, and it was rather chilly. Matter of fact I found ice starting to form in places. Official first day of Winter is the 21st but we all know it’s here already. I have to mention something on a personal note. December 21st is my grandmother Seybolds birthday. And The first day of Summer June 21st is my mothers birthday. Both have passed but are always remembered, and I do meen always.

I’m not done with my grasses infatuation, for that matter I never will be it was on the top of my list yesterday as I moseyed around some grassland areas. I ended up shooting some closeups of cottonwood leafs in ice that will be heading for my gallery site. I really like how they turned out. But I thought I would post something different here. A shot I took a few weeks back. The sun was setting and I was standing along a country road admiring the tallgrass. Actually trying to get some back light shots of the seed head glowing in the setting sun.  This shot was looking east away from the sunset and like many times the colors of the eastern sky out done the western sky.

The hedge post, barb wire and tallgrass are such familiar scenes in Kansas one just needs to go out in the country anywhere in any direction and there they will be. I think this shot has about as much Kansas feel in it to me as any I’ve taken over the years.

Have a good start to the week everyone. 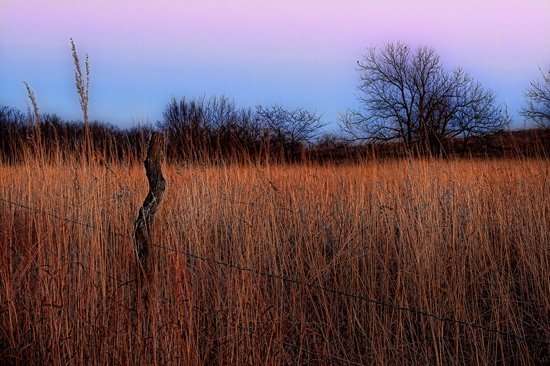