I recently returned from a 7 day 6 night road trip that took me from Kansas to a two night stay at Indian Cave State Park Nebraska. Then back through Kansas for two nights, one at Chase County State Lake and the other at Fall River Lake State Park. Then down to Oklahoma for two nights at Robber Cave State Park before heading back home with a short visit to Osage Hills State Park In Oklahoma on the way back. It was a trip of pure pleasure. Exploring some new places in search of and enjoying the Autumn landscapes. I camped each night enjoying cool evenings and the strange feeling of going to bed at 8pm each night instead of my normal after midnight hours I keep. One thing about camping, when it gets dark and you have no after dark plans, hitting the sleeping bag is about all there is. I did stay up a couple of nights and listened to an audio book that I enjoyed very much. It is the origin of the quote at the beginning of this post. Joseph Campbell and The Power of Myth with Bill Moyer. I greatly enjoyed it. So much so that quotes by Campbell have lingered in my mind.

I traveled just over 1300 miles during my 7 day 6 night venture, never considering the distance, only the journey. Lands didn’t seem all that foreign to me. Even at Robbers Cave which is situated among the Sans Bois Mountain. I felt mostly at home, at least very comfortable and relaxed. For 7 days I lived a somewhat reclusive life. I did visit with the occasional fellow camper and had a nice conversation with park ranger at Robbers Cave for some 30 minutes. For the most part my plan was to keep to myself. Find those places that filled my mind with wonder while listening to birds sing melancholy melodies among nature. For the most part my plan worked out well.

There was one moment, more like an hour or so on the forth day as I was passing back through Kansas I became very nostalgic. For that hour I seemed to relive many years of my life. Remembering past experiences and places. What struck me the hardest during this time of great nostalgia was when I would wonder about the choices I had made in life. If I have made good choices or bad choices. I touched some feelings that brought emotions to the surface. Not bad emotions necessarily but deep emotions. I would contemplate past decisions that I knew where life changing. I knew my life had been, up to this very moment, a direct result of choices I have made along the way. It also struck my that life is extremely short but with endless possibilities of how it is lived. As nostalgic and emotionally charged as I was during this time I had a feeling of peace and calmness. It was not from the fact that I have made only good choices because I have not. I believe it was due to the fact that I was confronting them and attempting to understand and come to terms with them. This is not the first time I have experienced such deep feelings. It happens on occasion. It might be getting more frequent with age. 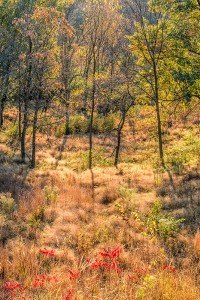 During the last day of my journey and as I was making the long drive back to Kansas which would take me home, I had a good feeling of accomplishment. It wasn’t from the multitude of image that had been captured and now resided on a memory card, but from the memories that resided within myself. My own mind, my own body, my own soul, my own home. Places that have continue to shape who I am and leave indelible marks. Like those etched on cave walls by the hunters, gatherers, mothers, and fathers tens of thousands of years ago. It might as well have been yesterday that the paleolithic cave art was made. Even in the midst of this ever changing world, our memories have the power to bring our past back for us to once again contemplate.