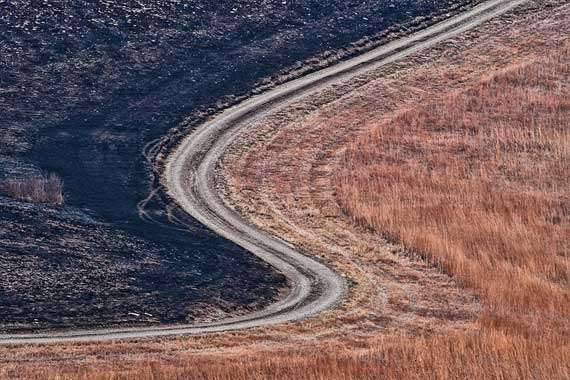 Thought this would be a good time to share this shot as a daily pic. I took this just over a year ago on Konza Prairie. I had climbed to the top of an adjacent hill and walked to the ridge line  looking of the burned hillsides to the north and the unburned lowlands to the south. The road formed a wonderful accent to the as the fire line separating the two adjoining lands.

There are many research projects that go on at Konza Prairie, none more important that the survival of our tallgrass prairies. This photograph was taken for the for the enjoyment of the view but helps to illustrate the the immediate impact of fire. Some may think that fire is a bad thing anywhere. Nothing could be further from the truth. Until the encrouchment of man on the native lands mother nature took care of the fires. Then the first humans to inhabit the pariaire that are now the central parts of the U.S. the Native Americans realized the importance fire plays on the survival of the lands and wildlife.

If you would like to read more on the necessity of fire and the survival of the prairies just click here.