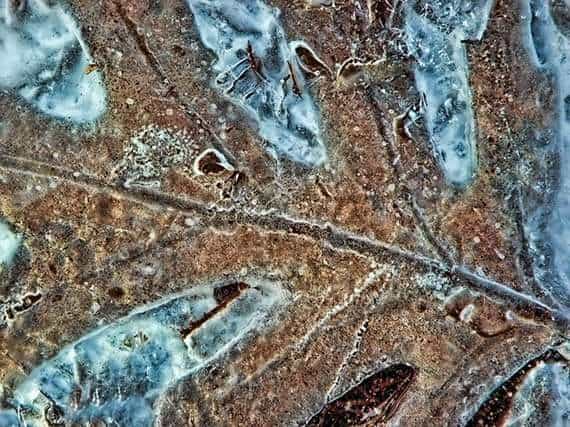 I came across an area that had some shallow ice and leaves this morning . Again an area in Shunga Park amidst many big oaks. I get very fascinated when I find groupings of leaves all bunched up lying on the winter ground. They provide such an array of abstract lines and forms. Some where frozen under the shallow ice having a deep dark tone. Along the edge I found this one with just a glazing of ice over it and locked in tight by its surroundings.

I haven’t mentioned that as of late I started carrying a newer point and shoot camera with me. The older Fuji finepix is such a small easy to carry camera that it’s hard to not just grab it and stick it in my pocket. But it is very limited in function. With no vibration reduction control it was becoming hard to get at least decent sharpness in many shots. I have had a Nikon Coolpix p80 for a year or so that we bought for mostly the wife to use. She does take many pictures which I love seeing her do. She’s big into the scrapbooking thing so pictures are a must. Well wouldn’t you know it a couple of months ago she entered a drawing at best buy and won another Nikon coolpix camera! This is a smaller more pocket ready one and she just loves it. So I keep my hands off of it. She says I am always messing with the settings and she never knows if she can just pick it up and take a picture (imagine that, me messing with a camera)! So now I have snatched on to the P80 and have began using it. It is a nice camera just a little more bulky due to a bigger zoom function on it. Anyway thought I would just mention that. This shot was taken with the P80 in macro mode. I processed this with intentional thought of bringing out the blue and gold colors which I think go very well together.  At times I know I get carried away with color and it’s something that I’m always thinking about. My easy does it approach is relative but my relative meter is sometimes on the slightly heavy side. 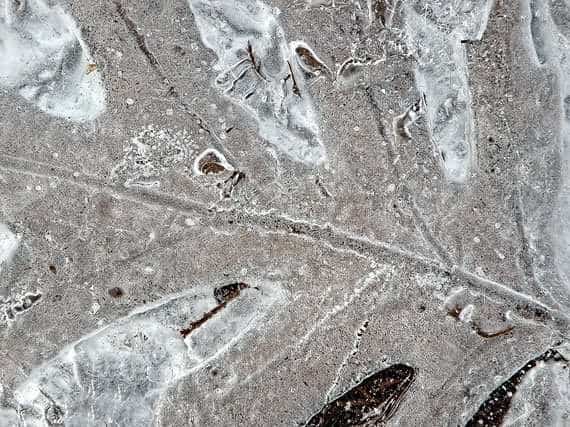 Here’s another work up of the same shot with just a detail enhancement layer added.