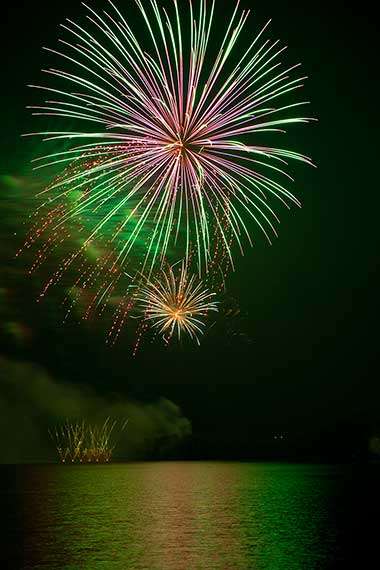 Apologies for not getting a daily photograph on here for the last few day, the long holiday weekend seemed to really mess my schedule up. The older I get the more a daily routine seems to be of comfort. I don’t like getting into routines to much I think it makes one stop being spontaneous but somethings are just hard to get away from.

Moving forward with today’s photograph, it is obviously of fireworks. I managed to make it out to Lake Shawnee here in Topeka Sunday evening and spent a couple hours wondering if the rain would stop. Just as I was about to give it up around 8 pm after hours of rain (some very hard) the clouds lightened up, a couple of rainbows appeared and the rain stopped. Wow, what timing. So right on que at 10pm the first colorful blast went off.

This is the first attempt I have have at shooting fireworks (with a camera). I read some good tips on a few photo forums about photographing fireworks and they seem right on. Tripod, manual mode, bulb setting, remote shutter release, 2-5 second exposures seemed to work very well. This was taken with a 17-40mm lens at 40mm, f8, 4 second exposure.

Now that I have experienced it and it’s over I want to try it again. Like many things in nature photography sometimes one chance is all you get, at least for this year. It’s nice to have things to look forward too if not in the immediate future for next year as well.