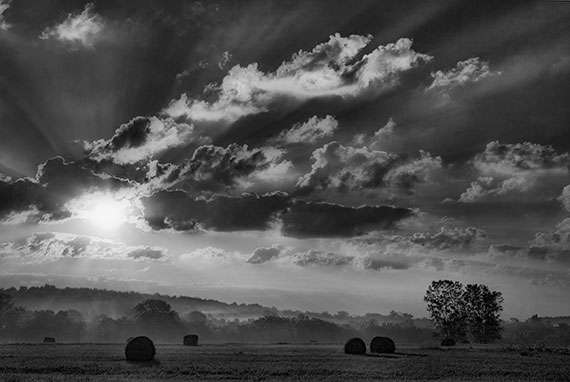 More summer, no need to try to get away from it so might as well embrace it all the way. This is a new work up of a shot I took a couple of years ago, early morning along the country road in Kansas. I have struggled getting colors to look properly in it. There is a tremendous amount of contrast in the image, the fog was lifting the grasses where wet and the sun was bright.

This is a single exposure shot directly into the sun trying to expose the brightness of the sky next to the sun. I wanted to get the sky right but still save some detail in the what would be the darker foreground.  The exposure worked out to that effect but the colors have always been iffy at best.

A previous daily photograph of the Teton Mountain range with similar contrast worked up very nicely in black and white and that is what gave me the idea of trying this shot worked up similarly as well. It’s a very small part of this shot but the shadows of the bales in the foreground was my guide in getting this to look the way I liked it. There had to be good separation between the small shadows and the grasses themselves.

It’s always fun to revisit some shots with a new take on image creation.