I returned last Saturday from a 3 day stay at Harry S. Truman Lake in central Missouri. A rather impromptu trip just to get out and enjoy time in nature with the weather being perfect for camping. This was a solo trip with the hopes of catching some of the fall colors around this beautiful lake in the northern parts of the Ozarks. Around 250 miles from home the 3hr. or so drive would be nice ending up in such an area with potential that I hadn’t visited before.

The weather was spectacular and I arrived at Berry Bend campground what would be my home away from home for the next 3 days at around 4pm on Wednesday 10/12. I ended up having an entire campground to myself which was a shock beings the weather was great. Now my plan was to explore most areas around this sprawling body of water nestled deep in the timbers of mostly hardwoods in search of colorful scenery, rocky bluffs and the like. I knew it may be somewhat on the early side of finding the area in peak color and that was the case. Along with the very dry summer many parts of the country has seen along with late season warm weather color was a real hit and miss. There were spots in the woodlands where trees had decided to shed their green for yellows, oranges and reds but the majority had not. Actually it appeared that some oaks and hickories were passing the color stage and going from green to brown which I would assume be due to the very dry conditions. 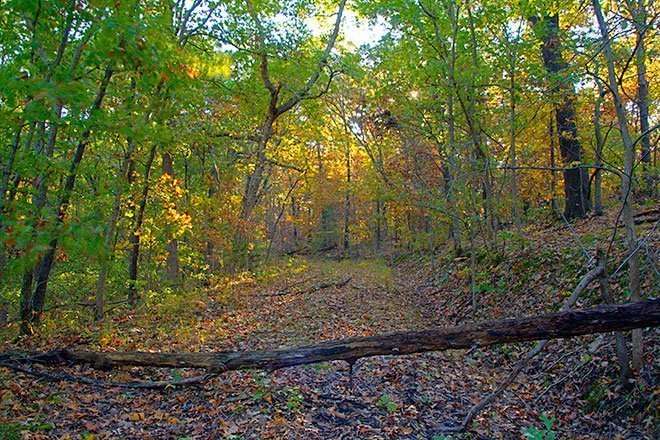 Thursday morning was hike time, I found an area not far from my campsite that had hiking trails taking off through the heavy wooded area, the morning air was full of wonderful sights, sounds and smells of the cool autumn time and I knew pictures or not the experience would be good for both mind and soul. These trails are simply that, paths that take off and end…. well I don’t know where they end there’s no map or explanation that tells you anything other than, here’s the trail have fun! About an hour in the the hike I knew there was a possibility if I kept going I could end up back in Kansas by wintertime and that wasn’t really in my plans so guess that meant turning around and heading back in the way I came. I did hike back up the same trail 15 minutes or so and notice what appeared to be an old roadbed that I had passes on the way in that from my estimates would head back up to a main road not far from where I was parked. So up the old road bed I went enjoying again some new scenery. And yes it did eventually lead me back out. By that time more water and a snack was in store as I relaxed in the wooded parking area enjoying the warming morning air and the sweat that I had managed to work up.

I spent a good amount of time in search of what I had envisioned for a photograph and that was colorful tree covered bluffs that this and many of these Ozark type of lakes are known for. Some were spotted from the main roads that ran around the lake but way to far in the distance to get any type of picture of. Studying the lake map I had got from the Berry Bend campgrounds I was staying in I noticed a couple of country roads that headed back into the lake and appeared to end at the waters edge, just what I was looking for. One turned out to be a spot that had a wonderful view across a somewhat large distance of water to what was just that, tree covered bluffs. I found this area at around 3pm and took a few pictures but wasn’t really getting what I wanted. For one the sun was bright and distance was still rather great across the water to the bluffs. I could have put on my 70-200mm lens and picked out specific compositions but it just wasn’t what I had in mind. A pano of this area seemed to be just setting there waiting to be photographed, all that was needed was better light. This was going to require a return in the early evening in hopes of that.

At 6:30pm I found myself once again standing in this area waiting for the sun to make it’s way down to just below the western horizon which was to my left. I attached my Canon 24-70mm f2.8L lens situated my 60D on my tripod in the vertical position and swept the far bank with overlapping images to stitch together into a pano. 12 shots were required to completely cover the area I wanted, all taken at 70mm, at f/8 with a 1.5 sec. exposure. The longer exposure seemed to be the key for me allowing a smoothing out of the water. With images on the memory card the final result would have to wait for stitching and processing work. The image ended up being 28,823 x 4,941 pixels in size and 120 inches x 21 inches at 240 pixel/inch. The layered image could not be saved in photoshop due to the 4gb file size limit of tiffs with the final single image file ending up being just under a 900mb file!

Not many more images were garnered in my 3 day stay at Harry S. Truman Lake, colors were muted and my time may have been somewhat early for such things, but something much more valuable was, a renewal in the magic of nature. The best times were spent just standing and enjoying being there. Being surrounded by open waters, distant views of natural bluffs, heavy wooded trails the occasional turtle crossing the road, the beautiful white pelicans that filled the morning skies above the water, the river otter I witnessed Thursday morning making it’s way from one wooded area to another and even an armadillo that hurried off to the side of the road as I turned the corner making my way back to camp. These are the real reasons I must spend time in such places, to enjoy what an otherwise busy life does not offer. Peace, serenity, quiet times and the knowledge that our natural lands are fragile areas teaming with fragile life.