January 29, 2011 marked the 150th anniversary of Kansas statehood, who would have thought as a state we would still be going strong. Of course the strong part is opinion, some may think our forward thinking is doing more harm than good. I didn’t set down here with intentions of writing a post about Kansas or the trials and tribulations of the past 150 years, there are many sources where in depth information of that kind can be found, but a few things have caught my attention that I have my own opinion about. Amongst other celebratory things going on we have a new stamp! And It is being told that it represents our “Forward Thinking” as a state. 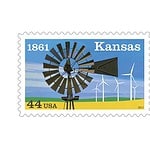 As you can see it’s simply the old windmill that every farm had back in the day with the new wonderful modern all powerful wind turbine energy generating monsters in the background. How wonderful that we have moved from using them to pump water for livestock to generating electricity for our modern lifestyle.

The old windmill had but one task, to pull water up from the ground. It had a few side effects as well. Extra water for livestock and wildlife. A place where trumpet vine could grow and burst into blooms in the summer. A place where chickadees, meadowlarks, red-tail hawks and cowbirds could rest on the open prairie. These are just a few that come to mind immediately.

Now, for our forward thinking we have the powerful and almighty OZ, I mean wind powered electric generating systems. These have but one task as well, to generate electricity. They also has a few “minor” side effects, mostly being adverse effects on humans living too close to wind turbines which include vertigo, panic attacks, migraines sleep deprivation, internal pulsations, quivering, nervousness, fear, a compulsion to flee just to mention a few minor inconvenience. But have no fear for up until now, the Government and the wind companies have denied any health risks associated with the powerful noises and vibrations emitted by wind turbines, gee yeah think! The Government and wind companies say everything fine! Sure it only might effect a few rural people at most, now. Do you really think they are done erecting them. And a little new side information, there have been a slew of turbines catching on fire.

This does not even take into the account of ecological and wildlife disruptions and effects. Which to tell you the truth sometimes I am more concerned with. Nobody knows the true effect on man, land or animal, all we know is that it can be a source of cheap electricity.  Has anyone ever seen the mating ritual of the greater prairie chicken? Sure most probably don’t really care, but If I was a betting man I would bet if you did you would be amazed, delighted and somewhat moved by it. Is that wrong to have in our lives, something that moves and inspires us? Should we throw all that “tree hungin” garbage out the window in return for “energy”? Lets say we did, now we are energy independent, turn on all the  lights in the house jump into your hummer and go anywhere you want. Where would you go, and what would you expect to find once you got there? It sure wouldn’t be the place it is now. Maybe if your lucky there would be free electricity so you could keep  you phone, pads, pocket wizards, music players and oh yeah the 20 mile per charge hummer your driving charged up! (Well, maybe we need to keep a gas engine in the hummer). Does anyone think of the consequences of erecting giant spinning blades across open lands?

A wonderful place for more wind turbines, what are we waiting for, cheap energy! Hooray!