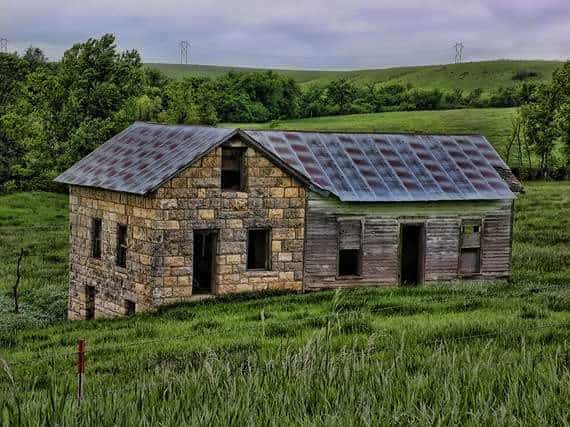 A typical view of the flint hills and days gone by. I really like this shot, but it makes me mad to look at it. Yes it is a shot of mans mark on the land the abandoned house most notably but that’s a part I like. Everything around the house is undisturbed. The fence in the foreground doesn’t seem to be an issue to me either. The problem, The distant rolling hills, the classic trademark of the flint hills of Kansas. And then, there are those dag gum utility poles! This is a shot that I would be spending some time capturing if it wasn’t for those electrical line towers!

Hey I’m as guilty as the next guy, I depend on having electricity in my house. Clean, convenient, cheap power. To bad “none” of those requirements are met. Technology does have it’s limits and we are working towards meeting those requirements (hopefully). But scenes like this aren’t going away. And to make matters worse now they want to add ginormous windmills all over the prairies as well! Clean, could be. Convenient, no more than what we have now. Cheap, yeah right like our electric bill will go down with the introduction of hundreds of millions of dollars worth of windmills on the land. I may be sounding somewhat anti-enviromental with saying such things, don’t get me wrong I’m all for renewable energy that can be produced in our own backyard. But the price that will be paid is very long term. The impact to the lands is very long term and despite what the windfarm companies say, it will not be a small impact for flora or fauna alike. Ok, I will get down off my soapbox now. Just give it some thought.