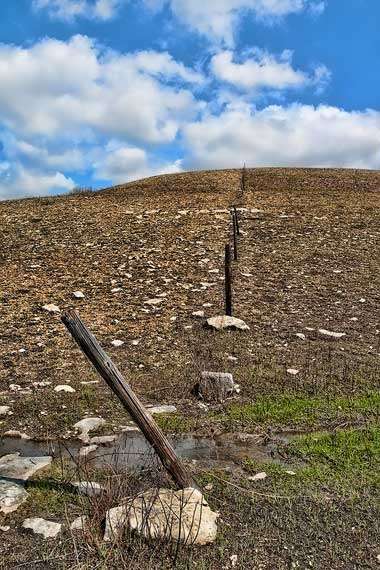 This shot was taken last April 18 deep in the Flint Hills. After the spring burns the land reveals the reasons it has remained unplowed and unbroken for tens of thousands of years. Rock, lots and lots of rock. Much of the Flint Hills are composed of limestone and shale with plentiful fossils of prehistoric sea creatures. Bigger chunks of limestone mixed with lots of flint or chert. This rock not only exposes itself on the surface after the burning of the tallgrasses but extends down and down into the earth.

It’s a land that transforms each year from rough rocky hills to the flowing plant life of tallgrass. From horizon to horizon the magic of the Flint Hills, the Tallgrass Prairie and the ecosystem it sustains is (in my opinion) what life on earth is about.

Take time to enjoy the prairies of this world. Take a trip plan a vacation experience what is, life at it’s best!

“As to scenery (giving my own thought and felling), while I know the standard claim is that Yosemite, Niagara Falls, the Upper Yellowstone, and the like afford the greatest natural shows, I am not so sure but the prairies and plains, while less stunning at first sight, last longer, fill the esthetic sense fuller, precede all the rest, and make North America’s characteristic landscape.”
~Walt Whitman, Specimen Days, 1879