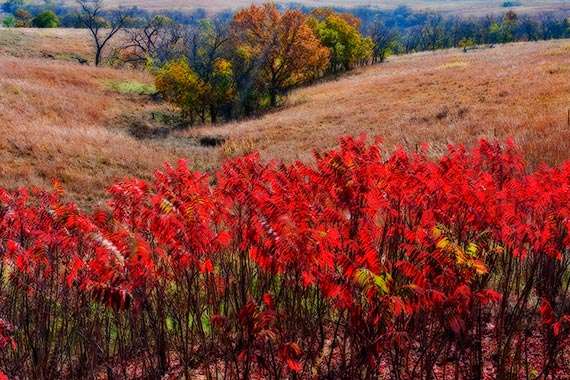 Keeping with my recent daily photograph posts that I have a little Orton effect theme going on I thought I would post 2 of them today since after tomorrow there will be a little break in the posts here and I will be sleeping under the stars for 3 nights in Arkansas and probably under some autumn hardwoods napping during the days.

Both images were taken along Moritz Rd in Geary Co. standing in the same spot a few minutes apart. Doing my slow old man driving routine (I mean looking for things to photograph routine) I came across some patches of sumac that really seemed to standout. It was already around 10:30 am so the sun was starting to be trouble but this area was just east of the road and still had some back light going on with the sumac. Sumac is one of those plants I just can’t seem to get enough of even in summer it catches my attention but then now in fall nothing really comes close for bright red color. Both shots were taken with a 17-40mm lens this second seemed well composed at the far reach of that. Both worked up very similar with just minor processing needed and Orton effect applied, no additional color or saturation is applied to either image. The processing with the Orton effect did come to mind when I was capturing these shots for the simple reason that the wind was blowing and I chose to shot at an f/16 aperture and only gave me a 1/6 second shutter speed so there was going to be some motion blur happen. Something that I have learned and become more comfortable with this last year or so is that if the wind is blowing (which is like everyday in Kansas) don’t let that keep me from creating imagery, just learn to take advantage of what is offered at the time and create something with it. The Orton effect does a great job of producing a specific look to what other wise would just be a blurry image and flora can benefit tremendously from this . 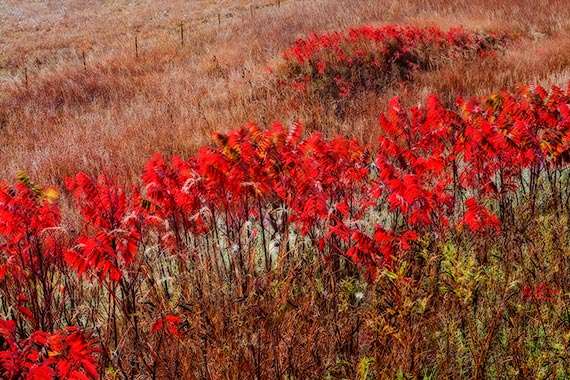 I know I will come across plenty the 3 days I’ll be in Arkansas but I already miss shooting it on the plains and flinthills of Kansas. Hopefully the weather will allow it to hang around another couple of weeks so I will have at least one more opportunity here at home to go out and photograph it, but that might be hoping for to much.